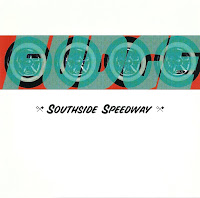 In 2009, I offered you no small amount of music/insight regarding Richmond, VA's Fudge, whose weirded-out spin on dream pop was nothing less than sublime on a spate of early singles and an often phenomenal debut, The Ferocious Rhythm of Precise Laziness.  By the time of that particular album (1993) the whole shoegazer shtick was getting a little predictable, but I'll be damned if this crew didn't incorporate something a little indigenous into the recipe - something I was never quite able to put my finger on.  What a difference a year made.  By the time of their '94 follow-up, Southside Speedway, the band had eschewed a lot of that crazy cool haze and tremolo - a development that was a bit of a bummer at first blush.  I have to wonder how many Fudge-istas threw in the towel after checking out SS for the first time.  I know I was almost tempted to, but I persisted and grew into it in almost no time.  On an album that turned out to be their swan song, Southside tilted heavily in the vicinity of American indie rock, with signposts pointing to Superchunk and Monsterland.  There are a few instances of dissonant dross on this bad boy, but thankfully there's plenty of equally primo material that any combo of their ilk would be more than proud of.  But don't take my word for it.  Check out "Patty Hearst Machine Gun," "Superstar Junky," and "Our Francis III," just a handful of excellent songs that transcend any genre-fication Fudge were saddled with (for better or worse).  BTW, the links to most of my previous Fudge entries have been fixed.

I was one of the beneficiaries of that initial 2009 Fudge post. (Or maybe it was a later re-up...). I'll take your warning of their stylistic changes in mind as I give it a listen, but regardless, I'm super-psyched to have another disc from this band.

Thanks for this. Fudge (and especially their earlier incarnations) is still one of my favorite bands. Tony Ammendolia owns a brewery now here in Richmond fwiw.

Thanks for our comments guys. Pernt, there are some real keepers on here.

Does Tony still do music? I could care less about the suds.

Sadly no, I don't think so..at least not that I've heard about around town.

Hey - I'm Mike. Played drums in Fudge - well, for most of the band's life. Glad to come across these mentions when I do. We had a lot of fun. Also - Tony and Dave have been playing together a little here and there lately. Not sure if it'll ever make it out of the basement but I'm glad it's happening. Cheers.

Mike: The Ferocious Rhythm of Precise Laziness has been a desert island disc for me since 1992... Fudge was a KILLER band that didn’t get nearly the attention y’all deserved.

Hey Mike... David here - bassist on "Girlwish" and Twitch Hazel stuff - hope you're doing well. Yeah, I get back to Richmond a few times a year and Tony tells me that he and Dave might try to release a 7" or something (but who knows). But both are pretty busy, I suppose... especially Tony with his brewery. I saw the Chills in DC earlier this year with Tony, Tubb and Patton... good times.

Hey guys, any got lyrics for those