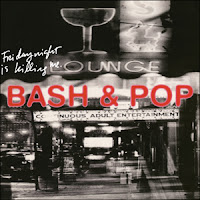 Just for the record, in the post-Replacements sweepstakes let it be known that Tommy Stinson's Bash & Pop debut Friday Night is Killing Me beat Paul Westerberg's premiere solo juncture 14 Songs to the clock by a good half a year in 1993.  I suppose if you want to get really technical, Paul had his two songs on the Singles soundtrack a year prior, and of course their was original Mats drummer Chris Mars who released his first solo disk, Horseshoes and Hand Grenades in 1992, but I digress.  All competitiveness aside, The newly reissued and vastly expanded Friday Night.. floored virtually anyone who encountered it.  Thing is, this record had a lot going against it at the time - veritably overshadowed in an era of high-stakes grunge, metal and the emerging Brit-pop movement.  Secondly, despite his reputation as founding member of the Replacements, he was after all the bassist and a minimally contributing songwriter.

In essence, the prospect of a Tommy Stinson spinoff project didn't quite garner or match the anticipation of Westerberg's 14 Songs.  Luckily, Tommy had connections to ex-Mats fill-in drummer Steve Foley and Wire Train's Jeff Trott who not only helped flesh out the ranks, but infused Friday Night with a ferociousness that could rival the latter-era Mats' live setup.  Comparisons to his former meal ticket are inevitable (and I'll even broach one of my own in a minute), but to my ears it sounds like Tommy had profoundly studied Keith Richards 1988 solo outing Talk is Cheap.  In terms of further inspiration antecedents, Stephen Thomas Erlewine's All Music critique of Bash & Pop entails multiple references to the Faces.  A more than valid argument, but much akin to Richards/Stones and the Faces, B&P plays their hand rambunctiously as-all-get-out yet never quite careens off the rails.  It takes a certain acumen to balance rough hewn with roughshod, and Stinson and Co. possess just the right skill set to put this kind of magic off.  Friday Night is chockablock with rollicking, seemingly tossed-off wonders like "Hang Ups" and "Fast and Hard," the latter with Paul Westerberg on backing vox.  Elsewhere, "One More Time" might have slotted in on the Mat's Pleased to Meet Me, and the boys strike a more consoling tone on the tamer "Nothing" and "First Steps."

Between Tommy's next endeavor, Perfect, a decade-plus stint with a reconstituted Guns N' Roses, and even a Replacements reunion, it would be another 24 years for Bash & Pop to belly up to the bar with a follow-up (check out this year's Anything Could Happen).  Regardless of the prolonged layover, Friday Night stood as a testament to Stinson's capabilities as a frontman and song scribe, and remarkably stands up over twenty years later.  Omnivore Record's reissue of the album in question is duly remastered, but the gravy is an 18-song bonus disc that commences with a quartet of solo home demos.  These lead into a handful of studio outtakes, some only appearing on hard to find promotional 45s.  The majority of the remaining tracks are a bevy of alternate takes, many none-too-discernible from the album versions, though an extra-strummy spin of "Tiny Pieces" stands out.  You can buy the whole enchalada straight from Omnivore, Amazon, and hopefully a local brick and mortar record dive near you.

I was first exposed to B&P on David Letterman in the winter of 92/93. As ridiculous as that performance was (Late Night band obligated to play instead of Tommy's band), it was life changing for me. The beginning of my journey into what I now refer to as power pop. This album will never get old and this year's Anything Could Happen is anything but a disappointment.