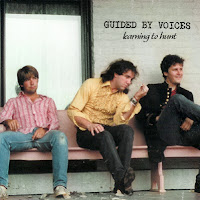 It's been a long time between posts everyone, my apologies.  I hope this makes up for it.  What we have here is a hypothetical GBV album, one that would have probably slotted in between Devil Between My Toes and Self-Inflicted Aerial Nostalgia.  The fourteen songs presented here eventually found their way onto Self-Inflicted, and much later on rarities and outtakes collections including the Suitcase series.  After the jump is an explanation (provided by gbvdb.com) penned by Robert Griffin of Scat Records, the label Learning to Hunt was slated to be issued on.  If you are unfamiliar with anything Robert Pollard and his varying guild of compatriots were up to prior to such seminal favorites as Propeller and Bee Thousand, this is actually a handy and often satisfying way to acquaint yourself with early Guided By Voices.  This album (that never quite was) contains some of the burgeoning band's most affecting songs, included but not limited to "Paper Girl," "We've got Airplanes" and "Liar's Tale."

From Robert Griffin (Scat Records): "Of course there may have been a few different sequences, but Learning to Hunt goes like this (according to a cassette Bob gave me when we were putting together the first Box). I don't know where the side break would go. A few of the songs wound up on Self Inflicted..." Also, this: "Below are the sequenced track lists for Back to Saturn X and Learning to Hunt, direct from the cassettes that Bob gave me when we were putting together the King Shit... LP. I'm not sure where the side breaks would have been, Bob didn't indicate that on the j-cards. Both of these records were totally ready to be put into production - edited master tapes, completed artwork, but in each case Bob decided at the last minute that were fatally flawed and 'shitcanned' them." (Note: see the separate Back To Saturn X for that aborted LP's tracklisting).

Sir please re-upload this awesome album from the legends Guided By Voices. Thanks.

Sir thank you very much for the new link 😀