Chris Bell - I Am the Cosmos Delxue edition (2017, Omnivore) - A brief overview. 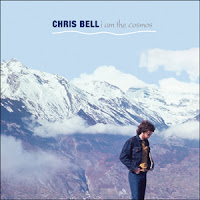 So much has been written and anthologized about Chris Bell that I'm bound to sound redundant regardless of what length I limit myself to, so maybe I'll keep this on the brief side.  For the uninitiated Bell was a Memphis songwriter/musician who made his mark in the local scene in the late '60s via little known collaborations Icewater and Rock City.  By 1971 he hooked up with ex-Box Top Alex Chilton who along with Andy Hummel and Jody Stephens formed the heralded proto-power pop quartet Big Star.  Bell factored in prominently on Big Star's debut, #1 Record, with a co-songwriting roll alongside Chilton, significantly contributing to the overarching tenor of the album, featuring the aching but strenuous "Feel" and the feel-good "In the Street."  Departing the band acrimoniously in 1972, Bell spent the next six years of his life making a name for himself in his own right with little to show for it, - that is while he was still alive.  He passed away in late 1978 in a car accident, leaving an unreleased album's worth of material on the reel.  Big Star's legend posthumously grew in stature in the 1980s and beyond, and with it a series of reissues saw the light of day in 1992, among them Chris Bell's solo recordings, compiled under the title I Am the Cosmos.  This month Omnivore Records have issued an expanded version of the album, along with a vinyl box set featuring his entire solo recorded output and pre-Big Star endeavors.

If Bell's contributions to the first Big Star album gave us a peephole view into his soul, I Am the Cosmos offers a vast window into the human condition.  The title track (released as a single during his lifetime) is a forlorn and wrenching romantic lament revealing the extent of his conflicted psyche.  The opposite side of that 45, "You and Your Sister" cuts the tension, but exudes no shortage of Bell laying it all out on the line for a woman who has misgivings about him.  "Fight at the Table" is a fun piano driven rocker that shows his capabilities in less angstier realms, while the born-again "Better Save Yourself" makes it's point without getting preachy.  And would you believe I've only touched on one third of the album?  There's no doubt that Bell struggle with depression and his inability to further his career in his lifetime factored into the overarching themes on Cosmos, themes that would in fact be adopted by generations of jaded listeners.

You'd be forgiven if you have "reissue fatigue" in regards to I Am the Cosmos.  After all, this double disk reissue follows up yet another two CD reassessment of the album, specifically the Rhino Records edition from less than ten years ago.  Omnivore's expansion actually cleaves off a handful of Icewater and Rock City tracks, which in fairness were recently moved over to the Chris Bell pre-Big Star collection, Looking Forward.  So what are we getting in exchange?  Essentially more of what we love, in the form of copious alternate takes, mixes and backing tracks of the precious few original songs Bell left us.  All of the extras might be getting too far in the weeds for more casual fans, but then again, are there really any "casual" Chris Bell fans?  See for yourself, straight from Omnivore or Amazon.
Posted by spavid at 8:59 PM