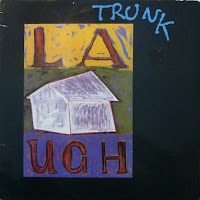 This is one of many albums in my collection, but what makes it relatively unique is that I don't know how it arrived there.  You know what else I don't know?  I don't know why Trunk went to the effort of hyphenating their record's one syllable title.  La-ugh?  I suppose they were digging deep for an idiosyncrasy.  The deets on this sloppy San Francisco treat are nil, and their shtick is/was maddeningly inconsistent.  Trunk seemed to plunder a few cues from the SST Records stable (Meat Puppets come to mind, and to a far lesser extent The Minutemen).  This trio are at the top of their game on "Sunbake," which finds them weaving in and out of Twin/Tone-era Replacements mode.  Too bad they couldn't sustain that motif for the song's five and a half minute duration.  There's a couple of keepers on side two as well - "Bump" and "Caroliner Squeegy" loosely clinging to the ramshackle tunefulness that was prevalent among their Homestead Records contemporaries Squirrel Bait and Great Plains.  A second album, Racket, arrived in 1992, and I'd be interested in getting my hands on it.  If anyone in the band sees this do get in touch.

This is a favorite. I think I mail ordered it from my local record store based on a review I read in Option. The review was probably similar to your description - I had a thing for SST then. I hear fIREHOSE crossed with Mission of Burma in the lyrics and sound. But they still had their own jammy vibe. I would love to hear other records by them.

this is surprisingly good

Any chance of a re-up? Thanks.