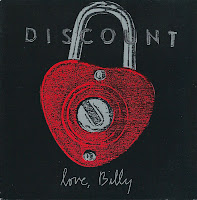 Last night.  Uggh.  Time for some protest music.  I'm not sure if I've introduced you to Discount or not - an unassuming but emotive punk-pop co-ed troupe from Vero Beach, FL who released a slew of singles and three albums, the last of which, 2000's Crash Diagnostic was phenomenally sophisticated and devastatingly affecting. Discount's main claim to fame was front-woman Alison Mosshart who in the twenty-first century went onto exponentially greater renown with The Kills and even more prominently The Dead Weather, a collaboration with Jack White.  In case you're wondering I'm not a fan of either.  But anyway...

Love, Billy isn't a proper Discount record.  Instead, it's a collection of five Billy Bragg covers - nothing more or less.  Of course, I had heard Billy Bragg previously in occasional increments on 120 Minutes, college radio, etc - but I never really got the dude until this disk persuaded me.  I didn't realize it at first blush but Alison & Co. took to task some bona fide Bragg classics - "Help Save The Youth Of America" and "Accident Waiting..." I almost immediately set out to expose myself to the original incarnations of these songs - an endeavor that expanded my CD collection by a half-dozen pieces, and somehow gave me an enhanced appreciation for Discount's rapid-fire renderings of them.  In short, this tribute ep got me through the door, and it just might do likewise for you.

From my per-view, Bragg's Thatcher-era output was his most potent, and if you're looking for a place to dive in start with Back to Basics and go from there.

01. Accident Waiting To Happen
02. Waiting For the Great Leap Forward
03. A Pict Song
04. Help Save The Youth Of America
05. North Sea Bubble