Given it's reputation as a thriving, uber-hotbed for emerging talent, Austin, TX must be a mofo of a town to be the proverbial squeaky wheel.  Here's hoping that Economy Island and Empty Markets garner the precious drops of oil and TLC they so richly deserve. 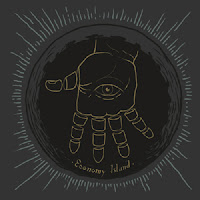 In the case of Economy Island, they aren't so much a deliberate throwback to '90s par excellence indie rock, rather a logical evolution of it, sans the annoying, genre-hopping juxtapositions of so many of their hipster peers.  This quartet has certainly delved into the back catalogs of esteemed forebearers Archers of Loaf, Polvo, and perhaps even Chavez.  Economy Island bask the nine tunes occupying their debut in rich tones, projecting a warm analogue glow while harboring a subtle slacker aptitude.  There's no heavy handed mystique or alienating airs to be had on Economy Island, just a prevailing adherence to a melodic, lived-in aesthetic that works wonders on "Stay Home" and "Flower."  Although these folks swiped their moniker from a Guided By Voices lyric, fandom of said Dayton, OH pioneers is no prerequisite.  Get Economy Island on wax directly from Twistworthy Records or Bandcamp. 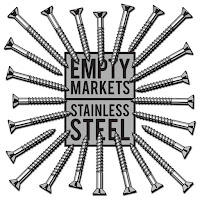 Empty Markets raw, punk/hardcore sprawl not only pulverizes with the kind of musculature you’d expect of their ilk, but unfurls an idiosyncratic bent that has made likeminded newbies Metz and Viet Kong such refreshing, visceral forces to be reckoned with.   This (now formally) co-ed  Austin trio has applied a revisionist tact to the artful chord progressions of Unwound, and incendiary angularities of early Hüsker Dü, all steeped in analogue sonic tactics, not to mention serrated reverb for miles.  Empty Markets frontman Drew Schmitz is ostensibly tinkering with dropped, or at minimum alternate guitar tunings, attaching an unsettling edge to Stainless Steel’s inherent pessimistic tenor.  A little subterranean moxie goes a long way in separating this troupe from the herd, and after barely cracking the cellophane on …Steel I’m already stoked to imbibe more.  Physical copies can be obtained from 12XU, and as for digital, Bandcamp and iTunes have you covered.
Posted by spavid at 5:35 PM

eToro is the ultimate forex trading platform for newbie and advanced traders.