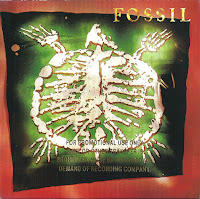 *Sigh*  There will not be a second Clinton administration, but musical remnants from the first are still rampant.  Going for a pop angle in the era of punk-cum-metal sludge was a lot like bringing a knife to a proverbial gun fight.  To their credit, Fossil offered some discernible musculature, yet not only did they fail to make it onto the front page, they weren't so much as mentioned in the police blotter in section "C."  Sounding like a loose melange of Jellyfish, Smashing Pumpkins and Smiths, the Bob O'Gureck helmed quartet led their sole album off with a bittersweet, albeit arresting hook-fest in the guise of "Moon."  Safe to say if this doesn't grab you, nary will any other minute of Fossil, but there's further treasure to be excavated - "Martyr's Wife," "Fall," and "You" to name but a few.   Fossil's consoling and mildly enlightened tenor didn't encroach even the remotest fringes of Hitsville, but I'll be damned if it was for lack of anything except good luck.

Thanks for sharing! Had this on my radar for some time, just intending to give it a listen after hearing "Moon". Looking forward to hearing the rest. Don't forget also the entertaining "Moon" music video:

I'm having some trouble with zippyshare. When I download the link, the album artwork downloads but the songs don't and it says there's an error. Any idea why this is? Thanks