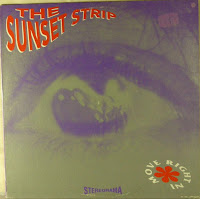 Sometimes it can take years for me to excavate all the dollar bin finds i have piled up like so many cable bills around my house - and this happens to be one I just got to over the weekend.  I don't know a great deal about their pedigree, but this Melbourne, Oz combo made a spectacular psych-addled noise that was more droney than stony.  Just how I like it.  Sunset Strip's sophomore LP, Move Right In, exudes reference points like Television, early Screaming Trees, and Seattle's Love Battery (though some of these are likely to be the product of sheer coincidence).  Move's... opening trio of tunes alone expose all of the band's key attributes and strengths.  The chord bending, "20th Century Girl" is a heady wash of Hendrix-ian maneuvers and indie rock persuasion, "Rainy Day Girls" loosely purloins from the Velvets and Rain Parade, and "I Want to Know" is imbued with the stripe of sludgy and fuzzy proto-grunge that Blue Cheer so capably made their calling card.  And the fun doesn't stop there kids.  These chaps did their thing with class, albeit with a bit of a derivative angle at times.  Not that I'm complaining.  Dig in.

I saw this band a few times back in the 80's and early 90's. Warwick Brown is an avid record collector and has worked at and or owned Greville Records in Melbourne since the mid 80's. They never had a big impact on the Melbourne music scene of the day but were usually well received by those that saw them. There were so many great bands in Melbourne during the 80's that attracted good crowds at gigs and plenty of critical acclaim but rarely transformed into mainstream acceptance.

Some more here, might need to put up a new link for the ep though, if anyone's after it.
http://musicfromoz.blogspot.com.au/search/label/Sunset%20Strip?m=0

About how many forgotten dollar records do you go through for every one of these you find? Reading this, I only had the terrible feeling you listen to a lot of terrible stuff, all so that we can hear Sunset Strip.

Thanks for your comments folks. I forgot all about the Music From Oz site. Good stuff.

Well Bryan, I don't spend to many regretful dollars, as I'm pretty judicious about what I buy. Of course, it doesn't hurt when a record store has a listening station to test used vinyl. Sure, I occasionally take chances on records I find through Ebay but the risk is part and parcel of the fun.

Sorry, I don't have the password to any other websites.

hey spayvid i just came across a band you had posted a while back called jill - scary thoughts. would you be able to re-upload that one? the link is no longer active. i'm really curious to hear it. also sorry for posting here. didn't see any way to contact you directly.

Will try to get to Jill soon. Keep checking back.