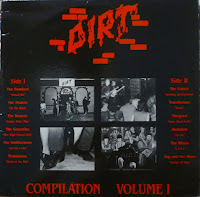 The album's called Dirt, and so is the label it appears on.  Fittingly, the record revolves around bands who played a venue called Dirt (in Bloomfield, NJ), however there's exclusively studio material to be had here.  Pretty amazing concept huh?  Believe it or not the album's seedy title belies quite a few selections that are worthy of vinyl enshrinement, starting off with a knockout ditty by The Numbers that's worth it's weight in turn-of-the-decade, power pop gold - heck, platinum even.  "Smash Hit" quite frankly wasn't, but would have been well served as one.  Should be a total dig-it for you Teen Line types in the audience.  In a similar realm we have The Modulators, who have penned a paean to the Dirt nightclub itself, "Down at the Dirt."  BTW, their Tomorrow's Coming reissue isn't to be missed.  The Shakes and The Bounce are responsible for mildly saucey stabs at co-ed synth pop, the Transformers steer things in a slightly more AOR direction, while the Whyos peddle a dose of full tilt rockabilly.  Shrapnel, featuring a pre-Monster Magnet Dave Wyndorf deal us a surprisingly danceable card, "Come Back to Me," evidently penned by an outside songwriter, and let's not overlook white boy, wanna be rastas Zap & the Wires.  Finally, there's a considerable Garden State heavy hitter on here, but I'm not going to disclose who it is.  You'll have to download Dirt to reveal it for yourself.  I'll give you a hint, their name starts with an "s." My apologies in advance for the rather intense amount of surface noise on some of these tracks.

I grew up and still live in Bloomfield. Wow, Dirt Club! Does this bring back memories.

Sounds like quite the compilation. I'm always down to hear some great power-pop. // ▲ fredsguidetolife.com ▲

Thanks! Sold this years ago and have regretted it ever since.

Links dead. Any chance on a new one?

If anyone wants a copy of this song collection, write me at phaota@gmail.com and I'll give you a Dropbox download link for it. Bought the LP, converted all the songs to MP3, cleaned and enhanced each one. Also put in the data properties for them.