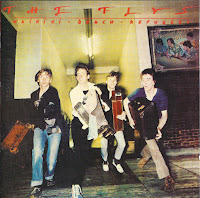 From a cosmetic standpoint, it might be easy to mistake this vintage, Conventry, UK crew as just another punk aggregation (suppose it doesn't help when you're album is reissued on a label dubbed Captain Oi) but that would be more or less inaccurate.  The Flys skewed considerably towards the "proto-punk" environs of Richard Hell, and to a lesser extent the New York Dolls.  Coming up in the glut of similar minded bands in the UK punk free for all spanning 1976-78, few were paying attention to this band, and I'm sure to their dismay they're less spoken of now than they were back then.  Waikiki Beach Refugees is far from a desert island classic, so to speak, but it's nervier moments - "Fun City," "Saturday Sunrise" and "We Don't Mind the Rave," really deliver.  The Fly's second outing Flys Own is more impressive, and I'll attend to it in another post

The 2001 reissue of Waikiki tacks on eight bonus selections, mostly culled from singles.

Thank you very much, I'm sure it's worth a listen, if Love and a Molotov Cocktail is anything to go by.

I'll be waiting for the other one. Have a nice weekend.

thank u very much

Thanks - looking forward to Flys Own

some great stuff on this LP, and you're correct, the second LP "Own" is pretty dang good too......ALL worth a listen for sure! Thanks!!!

Glad to see this got such a positive reaction. Enjoy.

Hey, I recognize the name of this one. Probably from a positive mention in one of the Trouser Press music guides this one was on my mental list (later an actual list on a piece of paper with listing in tiny type that would fit in my wallet) of what I would look for in the hipper used music stores. Never found it (same for a few of the other entries like The Leopards). So, thanks, and looking forward to checking it out many decades later.

"Love & A Molotov Cocktail" is, to me, one of the best tunes from the punk/new wave era. Thanks for this.

Many thanks for this. big fan of this band at the time, especially "love and a molotov cocktail".For the trivia fans out there, Neil O'Connor of the flys was the brother of Hazel O'Connor, and played in her band.