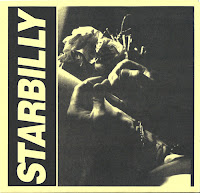 Starbilly was the brainchild of one Peter Searcy, a Louisville, KY native who made a gnarly punk noise in the mid-80s via the seminal, teenaged Squirrel Bait.  In between these two acts Searcy fronted a decidedly less gnarly, and in fact relatively straight up rock crew, Big Wheel.  You could say Starbilly pulled more from the Big Wheel side of the Searcy spectrum, applying just enough polish to 'billy's loud, passionate modus operandi to keep "Unmistakable Tick" from careening onto the third rail.  As to exactly what kind of "tick" they're refereeing to in the tune, that's got me scratching my noggin - a deer tick perhaps?  On the other side of this semi-transparent maroon coin we have none other than a cover of Husker Du's "Diane."  Starbilly's conveyance of the Grant Hart-penned, macabre classic is faithful, but strikes me as a bit stiff by song's end.  Contemporary to this single was an eight-song album, Master Vibrator, which apparently included both of these tracks.

While Starbilly have reunited as recently as this year, things have been quiet on the Squirrel Bait front for eons.  Peter, if you're reading this, please consider a S/B reunion.  Start out with Coachella or Riot Fest next year if you have to, and preferably expand from there, but for chrissakes just throw us a bone.  We've been starved for a good thirty years now.

A. Unmistakable Tick
B. Diane

Think I may have some Starbilly stuff around somewhere. Ya know, Peter is on Facebook....

Thanks Will! I would love to hear the whole album.

Please Peter get back together for new events! Do you have anymore Squirrel Bait stuff? I love that band and my cassette of Skag Heaven is one of my favorites in my musical library.