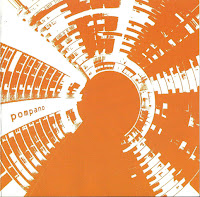 Sort of a dream-pop revival thing going on with this quartet, who ostensibly monikered their album after their Florida locale.  An AllMusic critique emphasizes Whirlway's affection for My Bloody Valentine, but that influence isn't as heavy handed as they make it out to be.  This is closer to the American corner of the shoegaze grotto, a la Ultra Cindy and Drop Nineteens.  Definitely some '90s Britpop inflections too, but nothing obnoxiously prevalent there either.  The heavier, up-tempo songs are the most effective on Pompano, including but not limited to "The Blinded" and "Strangeplanes."

Hey dude, I saw you posted a while ago a collection of unreleased Guided By Voices, and I was wondering if you have any of their side projects records, like Acid Ranch and Airport 5

I was never a fan of Acid Ranch, so I probably won't be sharing any here. The Airport 5 records are good. Still available from Amazon and iTunes.

What about the Howling Wolf Orchestra EP? Couldn't find it online (I am on the quasi-masochistic task of finding all their recorded output)