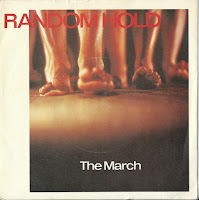 So I've been running into Random Hold's records for a long time, and as often is the case, I dare not take the plunge on an unknown quantity until the price is too reasonable to refuse.  Presented here are the fruits of my thrifty spoils.  I had casually pegged these fellows (and furthermore a woman, who would later be added to the final incarnation of the band) as being cut from cold/chillwave cloth.  That assumption proved to be inaccurate, and so were even more egregious prog-rock comparisons leveled by certain music junkies (I suppose a connection to Peter Gabriel might engender that sort of thing).  In actuality Random Hold boasted palpable, post-punk bona fides that were best exemplified on their earlier releases (Etceteraville aThe View From Here) which sadly I don't have.  Not like I could share them anyway since they're back in print, but I digress. 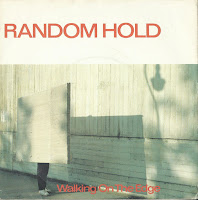 That brings us to two singles that were released after Random Hold split in 1980. A year later the band's moniker was dusted off and revived to represent a much different lineup (all the gory details are available on Wiki) featuring a new mouthpiece, Susan Raven.  RH v. 2.0 lose some of the original combo's creative edge, but maintain an intelligent air with adequate amount of world-weary tension to hold your attention.  I presenting these four tunes from a static-y vinyl rip, and would encourage you to buy the double CD set, Differing Views, a bonus-sized reissue of RH's Raven-era recordings for a considerable audio upgrade.