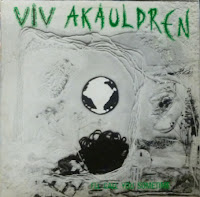 Viv Akauldren sprouted from the remnants of an early '80s Detrot combo, Trancegland, who amended their moniker after a roster shakeup in 1985.  A co-ed trio featuring axe-slinger Jeff Phry and drummer Deb Agolli mixing things up on the mic, Viv Akauldren brewed a subterranean alchemy in a cauldron (get it?) of their own warped design, purloining heavily from psych, but also inserting goth, and even folk flavorings.   I'll Call You's howling opener "Of," is full-bore intensity with all the subtlety of a Mack truck.  While there's precious little else here that's on quite the same frantic wavelength, Viv's sophomore effort tantalizes in varied ways on the distorto-pop pearl "Firewater," and the icy, noir "Inn'er Circle."  And maybe it's just me, but the sprawling spoke/sung "City Magic" strikes me as something of a template for Sonic Youth's "Eric Trip."  Hmmm.  The extensive liner notes in Viv's final album, 1990's Vivian's Fountain, imparts the following regarding I'll Call You Sometime.

My copy of the record was furnished with a bonus single featuring two swirling, stem-winding live cuts, both nearing nine minutes in length.  They are included in this download.

Just purchased this cheaply as a total unknown. It's a pretty great record, a couple of the songs would fit nicely on one of those killed by deathrock comps. Intriguing record

Any chance for a re-up I just found about Viv Akauldron.