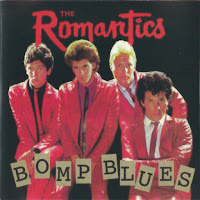 Even at their inception The Romantics must have struck more than a few people as passé.  With skinny ties, leather suits and fluffy hair in tow who wouldn't chalk them up as a passing fad?  Perhaps, but for those who explored the Romantics beyond their two of three mega hits were rewarded with some ace bar rock-cum-power pop that never left a hook to the imagination.  This bootleg compiles a live New Years eve radio broadcast from 1980, a live CBS studio session from the same period, a handful of more concert tracks from 1983, and the band's demo for Bomp Records.  Yep, the smashes are all accounted for - "What I Like About You" "Tell it to Carrie," and the rest.  To the Detroit quartet's credit, "Talking in Your Sleep" and "National Breakout" are more stimulating on stage than the already decent enough album incarnations (though the version of "Breakout" here is truncated - someone didn't hit the record button in time).  The demos sound strikingly similar to the finished versions, not that I'm complaining.  Enjoy.