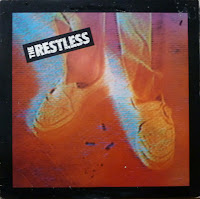 In terms of vintage garage-cum-power pop in the environs of Buffalo, NY, the Terry Sullivan helmed Jumpers are one of the few names still readily recalled from the late '70s/early '80s "punk" era.  I featured them eons ago on these pages via their '79 "Sick Girls" 45.  A classic, local or otherwise.  Ironically, after the Jumpers disconnected, Terry went on to front the altogether more ambitious and visible The Restless.  I say ironically in the respect that the Jumpers who only released a local single are lauded and talked about way more than the Restless, who not only recorded a full length, but issued it under the auspices of a major label, Mercury, to be exact, in 1984.  Per the norm with '80s mainstream albums, The Restless skewed to the more pedestrian side of the spectrum, but the songs were often well above average.  Shades of the Tubes, not to mention the more flattering side of Reagan-era Cheap Trick abound on sassy, bristling slammers like "The Contender," "1000 X"and "I Wanna Know."  Although they ran circles around most of their AOR contemporaries, The Restless weren't particularly distinct, ergo they were one of many neglected big label casualties of their time.  Maybe folks were too preoccupied with watching the summer Olympics that year.  Mystery solved!  Enjoy (you will).

Love it! There was a terrific article about The Restless in (I think) Esquire magazine that details their story with the Mercury Records.

No, never saw that article. About what year was that from. Sounds interesting.

Would love to have this one. Please re-up if possible. Thanks much for this amazing blog!

Hi Spavid. I hope you are doing well and enjoying a safe and happy holiday. Do you by any chance have songwriting credits for this album? By the way, if there is any music on my Buffalo Music Archive youtube channel that you would like to add to your collection please let me know and I can send you mp3s and art scans.

Correct. Esquire Magazine. October 1984 issue. I still have a copy.

Thank you very much!