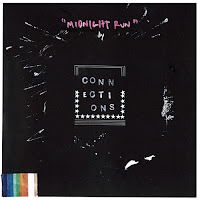 Pity the music scribe who employs an over-reliance of band comparisons as a substitute for natural eloquence.  Case in point, take a gander at the lengths the folks behind Wilfully Obscure blog went to a couple years back to drive the point home that Columbus, OH's Connections were the spittin' image of Guided By Voices.  Oh...wait a minute...that hack happened to be me.  So soon I forget.  At any rate, the comparison seemed more accurate than lazy at the time, but as the case with any good movie, book or a storyline in general, character development is the secret weapon to keep things from going stale.  Midnight Run, Connections' not-so-difficult third album is anything but.

Kevin Elliott & Co. gracefully embellish their nascent mid-fidelity penchant with (slightly) lengthier song structures and an even stronger semblance of reverb and warmth, curtailing the gobs of feedback a notch or two.  And while we're on the subject of sonic acumen, Midnight Run is informed not merely by the Fading Captain, but a raw, sinewy aesthetic that hearkens back to many of their '80s forerunners as well.  If you're anything like me, you might hone in on trace elements of Great Plains, the Embarrassment and Volcano Suns, yet Connections distill these scraggly components into a more tuneful context.  And deliberately or otherwise, they have the post-punk angle covered as well, if only by virtue of a mild distortion effect (or so it would seem) on Elliott's mic.  Ultimately, it boils down to the songs.  Their stripe of indie fuzz rawk isn't erudite or sophisticated on say, the level of Tolstoy or Nietzsche, but it is lovingly worn-in and slowly endearing.  Midnight Run rarely deviates from  Connections' assuring modus operandi, save for the atypically bubble-gummy "Weapons," and a couple of offbeat interludes.  In terms of guitar-centric aggregations, this quintet easily ranks among the top twenty infiltrating the ether right now.

You can experience Midnight Run on wax or digital for yourself on July 22, directly from Anyway Records, or Amazon and iTunes will have you covered as well.

Thanks for the promo of this underappreciated band. Didnt know they had something new out and look forward to strapping in for a wild ride.