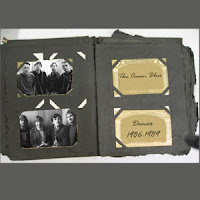 In 1990, hearing the Ocean Blue's "Between Something and Nothing" on college/alt-rock radio was about as unavoidable as encountering a mullet in a high school corridor.  Yes, that song (and to a lesser extent it's follow-up single "Drifting, Falling") was largely played to death, but did any of us really feel compelled to switch the station or turn off 120 Minutes when it came on?  It was indeed that kind of song, and the Hershey, PA quartet who molded it were quite frankly outliers of their era, eschewing any iota of machismo and abrasiveness, opting for clean, chiming guitars and an introverted demeanor - not unlike the Smiths, minus the pout and ego that is.  The Ocean Blue were perhaps the closest America had to a mainstream act that adopted the C86 aesthetic.  Sure, they weren't as rough around the edges as the Bodines or Mighty Lemon Drops, but nonetheless they were Anglophile to the core and all the better for it.

If you've ever wondered what these guys sounded like before Sire got a hold of them here's your chance.  This nine song compendium features demos for six songs that were re-cut for their self titled 1989 LP, a pair of arresting early tunes that were only available on a 1986 radio station compilation, and "Renaissance Man," which eventually surfaced as a b-side.  All the hits are here, including "Between Something..." and "Drifting, Falling," and as you'll soon discover the variances between the album/demo versions are subtle, but existent.  I have another set of OB demos, albeit with some overlapping songs, that I'll attend to a bit later. Enjoy.

Big thanks for this!

Very timely post, spavid. Was just reading about the band's recent live performances of their first couple of albums. Have heard some bootlegs of these shows, and the band still sounds great to my ears. Thanks for sharing...