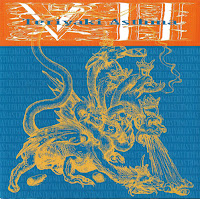 Leave it to the '90s to inspire compilation singles that were often more exciting than full length various artists collections (though technically, the nine volume Teriyaki Asthma series on C/Z Records was kickstarted in 1989).  The overriding emphasis was on burgeoning Seattle bands of the era (including a pre-stardom Nirvana), but national acts like Unrest, L7, Alice Donut, Ween, and the Pain Teens were sprinkled in among the subterranean Emerald City swill.  Perhaps the pinnacle of the Teriyaki Asthma saga arrived in 1992 via Vol. 7.  Seattle is duly represented by Hammerbox, an oft phenomenal female-fronted contingent who blended full-bore punk thrust with smashing vocal hooks.  It's hard to say that their contribution "Promise to Never" isn't my favorite thing on here, but I that nomination would more realistically have to go to Superchunk who take to task Motorhead's "I'll Be Your Sister," (the title truncated to merely "Sister" on the TA7 sleeve art) getting the point across even more succinctly than our dearly departed Lemmy did.  The Poster Children are represented with a solid non-LP goodie from what was arguably the finest period of their tenure.  As for Tsunami's "Punk Means Cuddle," let's just say it's nothing short of the band's very quintessence. This was ripped from my original 7," not taken from the CD reissue compilation it later appeared on.