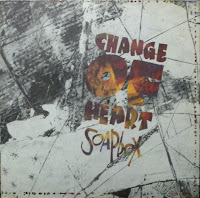 Helmed by Ian Blurton, Change of Heart were fixtures in Canadian indie rock for a sizable chunk of the '80s & '90s.  Renown for constant lineup alterations as much as their music, CoH peaked during the mid-'90s when Toronto's Queen Street music scene blew up, right as grunge hit in the States.  Though I'd desperately like to, I haven't encountered the records that preceded Soapbox (50 Ft. Up, Slowdance).  My understanding is that they had something of a punk bent to them.  As for Soapbox, not so much, save for aggro rumblers like the commencing "Massacre" sounding something like early Goo Goo Dolls, and further in, the riffy "Picture Perfect" and "Everything."  CoH seemed to be reaching for a similar aesthetic as their Montreal neighbors the Doughboys, albeit curtailing the distortion quotient.  It's hard to pin what the band's angle ultimately was on Soapbox.  My impression is that this is a transitional record, based on hearing the albums that succeeded it, which frankly skewed more towards "alterna" whims of the day.  I'm not fond of some of Change's jammier inclinations on this album, but they are what they are.  A handy retrospective, There You Go ’82-‘97 surfaced a few years ago, and is available from Sonic Unyon.

Note: A couple of songs here may have skips, which if anything is sourced from the record itself, not a shaky turntable.  They're fairly unnoticeable, but should I come across a better copy of the album you'll be the first to know.  Heck, maybe I'll find the CD version instead.

Thanks for posting this one. I have Slowdance. It isn't punky in the least. I did love their split single with Shadowy Men on a Shadowy Planet, where they cover the Diodes (Tired of Waking Up Tired). Cheers!