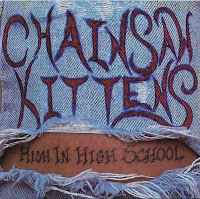 Recently had a request for this one.  As much as I was enamored with the Chainsaw's careening debut, Violent Religion, and for all perfect tens it housed ("Mother (of the Ancient Birth)," "Bloodstorm," etc...) Tyson Meade and his posse had something even more dazzling waiting in the wings.  1992's Flipped Out in Singapore upped the ante of Violent's... slashing punk via Tyson's Morrissey-esque croon, incorporating another wall or two of Marshall stacks for an even more wailing sonic wallop.  The melody quotient remained intact on Singapore, with the vocal theatrics pared down a tad, giving the Chainsaw Kittens pastiche a more linear power pop semblance...cranked up to eleven no less.  The record spawned a spin-off ep, High in High School, front loaded with the title track, and another amped-out scorcher from the album, "Connie I've Found the Door."  Rounding things out were for non-LP b-sides, including a pair of high-octane barnburners in the guise of "Couple #23" and "Stuck" slotting in appropriately.  They're followed up by a not-so-crucial retread of Three Dog Nights "One," and a spare piano ballad "Walk Softly (for D.M.)."