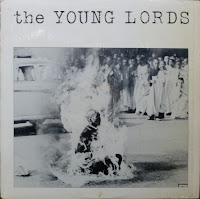 If the rather graphic depiction on the Young Lords album sleeve (to your left) has you doing a double take, it's probably for a valid reason.  Rage Against the Machine used a photo of the same self-immolating, Vietnamese Buddhist for their debut record as well.  Thing is, barely a modicum of intensity or tumult grazes the agenda of the Lords, a power trio whose modus operandi is par-for-the-course garage rock.  Not a bullet or a bombtrack in sight.  Sonically unremarkable (to be quite honest) these guys drifted from lightweight psych to punkier barroom maneuvers, peppering their tunes with churning organ riffs and occasionally sax.  In spite of frequent generic tendencies, The Lords succeed in a face-value capacity, even exposing shards of character on "Working for the Underground" and "I Want a Doctor Like Elvis Had."  A halfway there cover of "There She Goes Again" (cleverly hidden under the title of "Here She Comes") is somehow not credited to the Velvet Underground.  Funny that.

Not familiar with this album.I will check it out.Thanks.