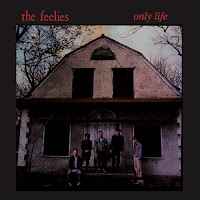 I suppose it’s inevitable that The Feelies will be venerated for their 1980 debut, Crazy Rhythms above and beyond anything else in their subsequent catalog.  Later records, specifically 1988’s Only Life and ‘90s Time for a Witness, may have lacked the nervy undulations and defined textures Of Crazy… , but compensated with a noticeably linear tact.   This was no doubt a symptom of the Feelies reshuffled lineup that came about after the band’s lengthy early ‘80s hiatus, but I don’t have nearly enough time to delve into the specifics of that. Nonetheless, two new reissues on Bar/None prove these Hoboken, NJ mainstays still had plenty of gas in the tank, perpetually nervous or not.

Call it Only Life “pastoral,” “organic” of “goes down easy” - all of which apply.  there’s a demonstrable purity to this album the original incarnation of the Feelies never quite exuded, or at the very least extrapolated on.  Admittedly, Glenn Mercer & Co’s third LP is an anti-climactic beast, with each song morphing seamlessly into the next, yet subtly stimulating, especially when absorbed in its entirety.  Only Life’s download-only bonus material, ironically consists of much more recent recordings, including three songs tracked at Hoboken’s legendary Maxwell’s just days before it would shutter in 2013. 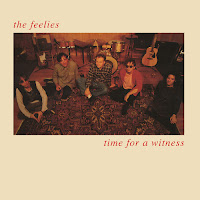 It’s ironic that Only Life concludes with a reading of the Velvet’s “What Goes On,” when it’s the Feelies succeeding record, Time for a Witness, that seemed to channel Lou Reed.  Arguably the band’s most driving and often straight-up rocking record …Witness boasts sizable mojo and fervor on the sinewy “Waiting” and the racing “Sooner or Later,” proving (not so) old dogs can learn new tricks.  And if it’s the reliably strummy and jangly tones you’ve come to love from the Feelies, look no further than “Doin’ It Again” and “Invitation.”  Bonus download tracks feature more live fun at Maxwell’s, with a cover of the Stooges “I Wanna Be Your Dog” no less.

I have a live show for you from a 1989 Lyon, France live performance that was taped for FM radio.  A Feelies show is nothing with cover, and you'll find no shortage of them here.

I first heard(saw) Away on 120 minutes when Dave Kendal premiered the video. To this day, that song is still one of my faves. The slow build and the solid not flashy drums are remarkable. Anyway, thanks for reminding me how great this record is.

Makes me sad to think of them as obscure, but I guess they are. It certainly didn't help when Bill disappeared to Florida to become a locksmith. (The story I'd heard, at any rate.)

Last I saw them live they opened for Robyn Hitchcock & The Egyptians in March 1988 at the Beacon Theatre and they sounded great.

Ordered the reissues after reading your review/reflection.

OK, I stumbled into this a year after you wrote it, but I feel the need to add a few recent Feelies facts:

* Their sixth album ("In Between") comes out tomorrow!

* One of the commenters mentioned that Bill Million moved to Florida... he did, and I don't know where he's living now, but he's back with the band.

* They still play live, a few times a year, on the East Coast, but have stopped touring because a few of them have hearing issues. Tour dates can be found at thefeeliesweb.com .

Also they've been one of my favorite recorded bands for years, and have been at the top of my "Want to see Live!" list for awhile. Last year I got to see them three times. Some of the best shows I've ever been to. If anyone has to chance to see them live, don't miss it!