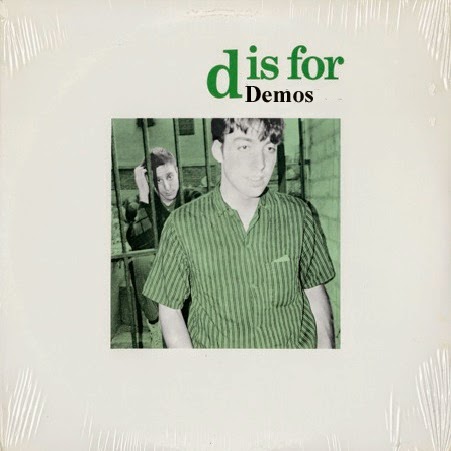 Well this is an interesting one.  I received a bunch of cassette bootlegs a few years ago and among them was one that had a side clearly labeled as "D is for Dumptruck demos."  D is for... was the first album for the Boston band in question, which made it's bow in 1983, first on Incas Records, and re-released on Big Time two years later.  At any rate, that label was a bit of misnomer, as the majority of the dozen cuts were actually demos for Dumptruck's second LP, Positively Dumptruck.

While I own the first three DT albums (nicely expanded and reissued on Ryko in 2003), it's 1987's For the Country that compelled me the most.  That being said, D is for... and Positively are pretty damn convincing in their own right, especially that warm and mildly rough-around-the-edges debut, which struck me as a scruffier, working-class interpretation of what Game Theory and the dB's had offered up to that point.  Maybe toss in a pinch of the Velvets here and there.  Take that with a grain of salt I suppose.  In addition to the Positively-era tunes, there are two cuts here that actually appeared on D is for... as the tape label originally purported, namely "Repetition" and "The Haunt."  On top of that there were three songs I couldn't identify at all.  The key Dumptruck nuclei of Kirk Swan and Seth Tiven remained intact for the first two albums.  The world renown Kevin Salem more or less filled in for the departed Swan by the time For the Country rolled around, and Tiven carried on under the DT moniker sporadically in the Clinton-era and in the early '00s.

Interesting - I have no memory of this particular tape, but I can definitely give some info. Unfortunately, I can't tell you the titles of the 3 songs without them - they're all Kirk's and I just don't remember. But this is definitely a collection of stuff recorded at different times, some of it just me & Kirk at home on a 6-track cassette, the rest sounds like tapes from band practice (the ones with the drum machine are the home demos). Definitely recorded them at different times - I suspect the home demos were from before the "D is for..." record and the practice stuff probably some before and some after that record.

Hey Steh. News travels fast! It sounds like the first six songs are from the same session, as for the rest I'm not sure. Yeah, I did pick up on the drum machine on certain tracks, but for whatever reason I chose not to mention it in my write-up. BTW, on the other side of the same tape is some Kirk solo stuff, but no track list on that either. Anyway, I really appreciate you commenting. Thanks!

A very, big thanks for these ! Although I'm sure Seth doesn't remember this, but he once told me, to his knowledge, any demos were lost long ago. That makes this a really big, treat!

Everyone should visit Seth's site at www.sethtiven.com and read Dumptruck's bio. If you're looking for a tale of the music industry (and the leeches it attracts) at its very worst, then this is a must read!

It has always amazed me that you had the strength and will to carry on, musically. If there is a new Dumptruck CD to be had, now (this blog), would be a superb place to announce its release.

My money has always been ready, Let the readers know where they may purchase...

Oxy, thanks for the kind words. I should warn folks that both my sites (www.sethtiven.com and www.dumptruck-music.com) are temporarily down, I'm working on resolving that but it may be a few more weeks before they're back up.

As far as news on the 'new record' front - yes, it's going to happen! The record is done & mixed, and I'm leaning towards using Pledgemusic.com to try to raise money to release it on vinyl (as well make it available via digital download). I'm not so sure about physical CD's, although I'm considering maybe of short run of those, we'll see.

In the meantime, if you're looking for any of the past records they're all (with the exception of 'Terminal', which I have no more copies of) available from me through Amazon, (where you can also get my solo CD 'Solitude', released in 2007). I think the following will get you there directly:

super cool! i moved here to Boston in late 84 from Philly, with a drummer i was playing with and "Back Where I Belong" was all over local college radio for a spell...saw the fellas around town when i could and really enjoyed the "For The Country" release as well....i think bassist Steve auditioned for whatever crappy band i was in at the time, when he was post Dumptruck/pre Big Dipper....this is all nifty stuff, big thanks!!!

Anyone who has not followed Seth and Dumptruck's work since "for the country" is in for a real treat. I could go into details on each record, but have previously down that in various venues during my rockwrite days. I'll just say that the band has a consistency that is very rare. The new stuff will be worth the wait.

Thanks for the upload. It looks great. We used to see Dumptruck in Connecticut back in the day. We always begged for 'em to play The Haunt but could never get them to. I never found out why.

Well, this is interesting. I will add my confirmation to the comment about the presence of "Back Where I Belong" all over the Boston college and alternative radio for a year or so.

Gawd I love the guitar on that recording.

And not to embarrass anyone with fawning fans, myself or the poster, but it is quite a treat to have Seth Tiven himself comment here.

One of my temporary regrets is that my late wife and I did not get out and see more of these Boston bands live. But while I know we would have had some fantastic times (we loved dancing to live music), I also know that what tended to keep us holed up in our apartment was a hell of a lot of fun and enjoyment too!

Thanks for another amazing offering.

Hi, I haven't thought of this band in years. Would be interested in a repost of you can.

Hi Can you post one or both of these.

Positively Dumptruck
For The Country

I don't really want to just post the full albums, but they are still in print and available on CD, directly from the band.
https://dumptruck-108015.square.site/