Catapult - The Architecture of a Year (1998, Blackbean & Placenta) 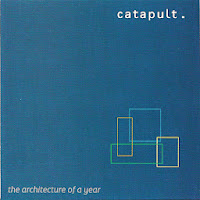 From my recollection, Catapult originated from New York's Capitol District, though I'm not sure if they were ever really ingratiated into the local "scene" as it were.  Genre-ly speaking, I always saw this trio as suffering from a bit of an identity crisis, encapsulated demonstrably within the confines of this disk.  Some of Architecture's opening salvos, particularly "August 15th" exude sad-core nuances, that to the band's credit were more enticing than what Seam and Codeine had to offer during the Clinton-era.  Elsewhere, Catapult indulge in mildly math-rawk textures, and by album's end there's some lightweight ambient/dub dabbling to boot.  What falls in between however is the most rewarding, namely two truly great slices of tremolo kissed noise-pop, "Next Door" and "Birthday," both of which angle in the vicinity of the Lilys and Swirlies.  In fact, Catapult's drummer would eventually collaborate with the latter of those two aforementioned dream-popsters.  "Sunday Sank at 11:00" slots into a similar realm, but sonically, offers an even more intricate latticework to dissect.  Alongside Architecture of a Year, Catapult were responsible for a handful of singles and an ep before parting ways.

Thanks for this. I have a 1995 five-song tape of theirs that's not mentioned on Discogs. It's pretty much pure shoegaze, and still holds up pretty well.