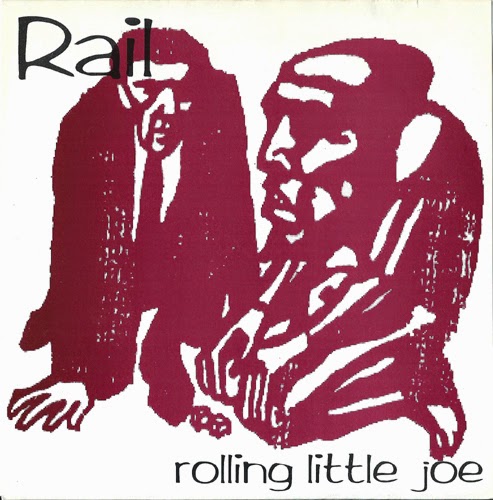 This post is likely to be the first and last to concern a band whose roster contained a former roommate of mine.  Some twenty years ago I had the dubious honor or sharing a flat for the summer with the guitarist of Rail.  And while my first (and only) foray into communal living concluded in Titanic-like fashion, my roommate turned me onto some phenomenal music in that brief time-span, and moreover, was solely responsible for enlightening me to a genre I had yet to familiarize myself with.  I remember it like it was yesterday...

Up until that point, "Emo" merely signified the moniker of a mildly obnoxious comedian.  That was until said roommate set me up with records by two bygone Washington D.C. acts - Rites of Spring and Embrace.  Even at first blush, I had an appreciation for both of them, but they were acquired tastes that wouldn't really sink in for a few more months, whereas some of his other suggestions, like Rocket From the Crypt and J Church made a much more immediate impression.  At any rate, I soon learned that he had his own emo aggregation, a ramshackle Rochester-by-way-of Buffalo quartet called Rail.  It wasn't 'til we departed our dilapidated apartment that summer and went our separate ways that Rail issued their first record, 1994's Rolling Little Joe.  A privately pressed 7" on 33 rpm, RLJ featured among two other tracks, an arresting A-side dubbed "Faith 51."  The song was in reference to the botched seize of the Branch Davidian compound in Waco, TX in 1993.  Sonically, Rail skewed toward D.C. post-hardcore, but possessed a melodic undercurrent as well.  The Cali band Fuel from the late '80s/early'90s were definitely on the same wavelength I might add (and worth investigating). A year later another 7" ep, Luke & Lauraland followed.  This one was a tad last wrought and boasted even greater tuneful sensibilities.  Upon it's release I don't remember hearing or seeing much of Rail again, although a full length was completed, which to my knowledge never saw the light of day.  There was a split 45 with the Autobots that came out in 1996 with the band pared down to a trio.   I assume they called it quits shortly thereafter.

If the music is half as good as your account of the roommate and your experience of the genre, this should be enjoyable.

Friends or associates who tip you to different music are often a key part of becoming a music nut. I'm getting ready to finally write to someone who among other things was vital to my wife's exposure to some great music, and that in turn helped seal the deal on our relationship (although I know I would have loved her even if her LP collection had ended with that Dan Fogelberg LP!)

Thanks Bruce. With new roommates come new record collections. It just takes one person to light the fuse.

Love the story, but I feel I must defend Emo Phillips as "amazingly eccentric in all regards" in lieu of "mildly obnoxious." He also has a great sense of humor for its nascent popularity immediately following his dive into semi-obscurity.

And Embrace still sound like a bad Magazine ripoff to me, MacKaye or no MacKaye.

Somehow I've already had the Rolling Little Joe 7" downloaded - even prior to reading this - which is bizarre enough that we should all be worried.

I went to college with Jamie, who sang and played guitar in Rail. They played at our school a few times in the early to mid 90's and they were always great - super tight and high energy, and without a doubt the nicest bunch of dudes ever. They did call it quits sometime in the late 90's. Jamie formed a band in NYC a few years later called Swain that was somewhat heavier and a bit more discordant; I can remember them reminding me of Rodan, but that may not be accurate. Jamie and I remain good friends to this day.

I've been looking everywhere for this band for easily the last 20 years. All I ever had of this album was a bad cassette transfer my friend made for me and that was lost years and years ago. Is there any chance you could reupload this?

Okay, this is my third reupload request this morning and that must be annoying. But... could you possibly reupload???

The original lineup was pretty tight. After a couple band members quit, they became more pop punk/rock and lost the emo. Rail released a couple singles with the new lineup and even recorded an album that was supposed to be released by Ringing Ear Records. But the label folded and the record was not released.

Fun to see this on willfully obscure.

I was actually roommates with guitarist Dave Byrd in 1993 for the summer. I heard the unreleased album. Unfortunate that it just ended up getting shelved.