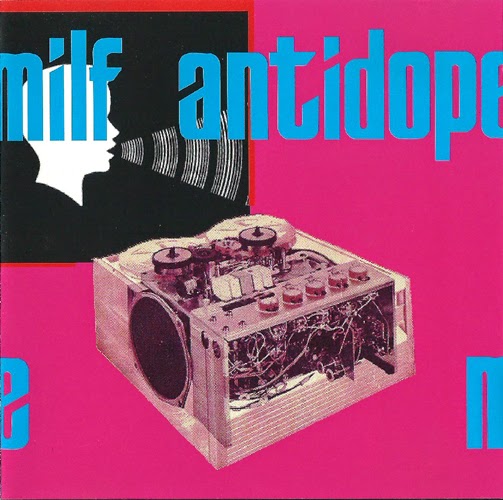 Low and behold it's milf's second album, and likely the last thing I have to offer by them after exhausting the rest of their catalog on this page over the years.  The title antidope was in all likelihood a pun on the word "antidote" (clever bastards these lads were, eh)?  Their first full length, 1994's godhead ha ha bus! was the pinnacle of their recorded output IMO, an album that wielded equal parts wry pop hooks and hyper distortion overdrive.  By comparison antidope was markedly dissonant and insular, delving into murkier terrain than milf had ever ventured into.  Challenging and oblique as it may be at times, antidope offers it's share of tuneful respites - "thom" and "isao minami" winning the most favor with me.  All in all it's an acquired taste worth acquiring, especially if you've been sold on their other swill.  Feel your Ginsana.

Oh. My. God. You continue to delivery amazingly man. Thanks so much for this.

is there any chance of a re up dude?

They played at my house once; an apartment above Parkside Candy in Buffalo.