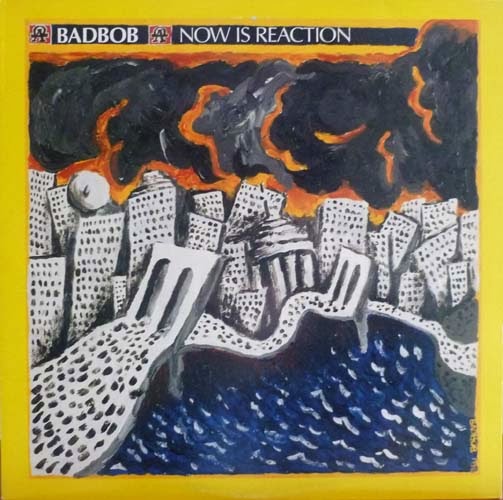 Quite posthumously (roughly twenty years after the fact) I encountered the Connecticut based indie label Incas Records, whose heyday happened to be squarely situated in the 1980s.  In the years following my first Incas discovery (The Miracle Legion) I slowly realized that this was a record label with a consistently winsome roster, featuring some of my soon to be left-off-the-dial favorites like Spiral Jetty, Valley of Kings, Cameraface and Rapture of the Deep.  So upon eying the Incas logo adorning the album jacket of Badbob's Now is Reaction on a recent record excavation, I was almost assured something satisfactory would come of the purchase, despite having zero beforehand knowledge of the artist in question.  In the end, this one wasn't necessarily a bulls-eye, but the dart landed close enough.  "Badbob" is the nickname of frontman Robert Therrien.  Prior to this album he cut several records under the same moniker but with a space between "Bad" and "Bob."  At any rate, I perceive Now is Reaction to be the work of a band, and not so much a solo record.  Therrien is an adept singer/songwriter who turns in a deftly crafted batch of melodically smart tunes bearing a respectable indie rock aesthetic.  There are a plethora of touchstones here, raging from the Feelies to Todd Rundgren, to Neil Young, but it would be best if I let you draw your own conclusions.  Enjoy, and just as a heads up, the best songs reside in the first half.

Another nicely written review. A Wilfully Obscure label, to say the least. Definitely worth a listen. Let me kill two birds with one stone, here. Thanks for the up and for tomorrow, as well.

Well, the Monday Mystery disc was excellent! As for Badbob, you were right about the back half. The first half isn't much better. Is it me or does the lead singer have a lisp? Regarding the second song, "Same System," as soon as it started playing, a heard a rather major rip of Shocking Blue's song "Venus." I just listened to both songs back to back and in my opinion, it's a good thing Badbob didn't have a lucrative career.