Why share a seemingly random 20/20 show from twenty-five years ago?  For starters they were a phenomenal quartet who helped codify and write the blueprint for power pop in one of it's most crucial and formative eras.  Secondly, live 20/20 boots are a tricky commodity to come by. Case in point, I shared a portion of a 1979 gig from the Palladium in NYC many years back and haven't stumbled across much more in the way of concert recordings since (though no doubt some are out there).  Suffice to say when I had the chance to lab a DAT recording of a reunion show from 1996 I dove right in. 20/20 are a specimen I'll gladly accept in any iteration and era, and if you have half an inkling as to what the band in question are all about you know exactly why. 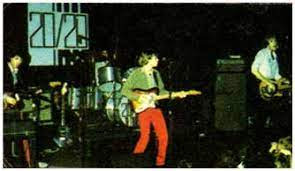 Why is it that bands (often of the one/two-hit-wonder variety) like the Romantics, Tommy Tutone and the Knack were anointed as the flag bearers for power pop circa the turn of the '70s and '80s, when much more representative artists (namely the Records, Rubinoos, Shoes, and of course, 20/20) were resigned to the cut out bins, and given short shrift by the mainstream music establishment?  If any of you are like me, perhaps you've pondered this as well. For better or worse what sells is what sells, and while the band did seize a recording contract with a division of Columbia Records in 1979, with two flawless albums to show for it (20/20 in 1979 and Look Out! in '81) they didn't quite come equipped with the shtick and short-lived charm of their chart topping contemporaries.  Fresh and beaming as 20/20's brand of guitar pop was when they initially arrived on the scene, the general public was distracted by shinier objects, so to speak, fleeting as they were.  After the band's deal with Columbia fizzled out, the independently released Sex Trap arrived in 1982 and a year thereafter 20/20 pulled the plug. Thanks to renewed interest in power pop in general circa the mid-90s, folks like myself were inclined to plunder the back catalogs of bands we missed out on when we were too tethered to Top-40 radio ten years or so before.

I'm not sure if this was the germ that sparked the reunion of 20/20 for their 1995 album 4 Day Tornado, and while it didn't exactly bear the exact tincture of the band that birthed classic sides like "Yellow Pills," "Tell Me Why" and "Cheri" it was a treat to have them back in any capacity. With the new record came some live shows, even if the quartet in question stuck primarily to their home turf of southern California. All of the aforementioned songs made the cut for this set, alongside deeper album cuts, and naturally, a bouquet of tunes from their then brand new record. It's hard to say if the guys were as spry in 1996 as they were when they established themselves nearly twenty years earlier, though you'll hear few complaints from me (save the exception of them omitting the debut LP's rather crucial "Jet Lag" from the setlist).  As I've noted, 20/20 concert tapes are a genuine rarity, and since another reunion doesn't seem particularly evident this show from Silverlake's hallowed Spaceland might be your last (and only) ticket.

So..looking at my boot list, I have some 20/20 that I'll throw your way shortly. In addition to two 1979 non-Palldium shows, I've got some demos as well. And to top it off, a 1997 show from SXSW that I recorded. I haven't listened to it in forever, so be warned it's not likely great quality. But it was a great double bill that night with Dwight Twilley (complete with Susan Cowsill on backing vocals).

Although I was never really enamored with the "Silverlake Scene" I loved Spaceland and went there a lot from 1996-2000. This 20/20 show happened a few months before I moved to LA unfortunately. Favorite shows from the Spaceland days are the Avengers and Tsar before the producer of their first LP strangled their songs in the studio.

Thanks Kouzie! Actually i have demos for the first couple of albums. I actually posted them on here when Wilfully Obscure was in it's infancy, but someone from the band informed they were going to be coming out as an official release. This must have been around 2008/2009. He kindly asked me I kill the link. Well, the demos never came out so far as I can tell, and he must have felt guilty for asking me to remove the link because he offered to send me a CD, specifically Sex Trap, which is quite elusive if you've ever looked for it.

Hi - sorry for getting back to you late on this. My computer has been dying slowly, but up long enough today for me to finally rip these.
I'm pretty sure these are all my transfers from the tapes. The SXSW show I taped isn't going to win any audiophile awards, but I've heard worse (it's actually fairly decent). I'm sending links to your @roadrunner.com address in your profile. If you'd like the links send somewhere else, please drop me a note at chriskouzes@gmail.com.

I think I have it still buried somewhere BUT... there is a really well done CD-R collection that MFV(Mastered From Vinyl) did in the mid 00s of all the demos from the first two albums, really cleaned up well and with love is what makes this one special - and about 28-30 songs on it as I recall. I'll keep an eye for that one and let you know....

Kouzie, did you record that show at Waterloo?! Was I at that show with you that year?
I was there and I think it 'twas w/ youz! :-D

YES!! That was us together at SXSW that year. Cannot believe that's coming up already on 25 years ago in a few months! Great set from Dwight Twilley (with Susan Cowsill) immediately after as well.

Emailing you the link to the SXSW now!

Hope the holidays are treating you and your family well this year!