As mentioned a few nights ago I'm forgoing my usual Chanukah singles cluster (again), but I've got the next best thing, a collection of some of the better EPs that made it to my turntable in 2021.  These three doses of collegiate indie rock that are at minimum very good, and at max are off the charts altogether. I buy roughly 20-30 or these short format 12"s every year it seems, and even if the continuing pandemic has slowed me down a tad I haven't run out of gas yet, so let's begin, starting with... 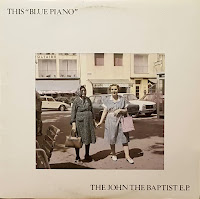 ...Montreal's startlingly great This "Blue Piano" who bled cyan hues of the best English exports of their era including but not limited to early Aztec Camera, Orange Juice and to a lesser degree Prefab Sprout. You can draw your own comparisons, but TBP had the UK indie aesthetic down pat and didn't sound contrived or forced in the slightest, forecasting the C86 gold rush just as effectively as the aforementioned acts that actually resided in Britain. The John the Baptist ep's two bookends "I Before E" and "Euphoria," delight and dazzle as much as any era Postcard Records or Rough Trade release. Mighty lofty words, I know, but don't take my word for it. Hear for yourself, and while you're at it check out the band's Soundcloud space for even more. 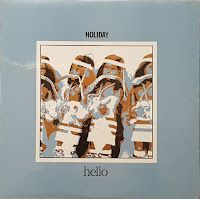 Equally as superlative, we have D.C.'s Holiday. No, this isn't the same Holiday that made waves in the '90s, rather the co-ed quartet this blurb concerns featured Lynda Hopper, alum of noted Georgia wunderkinds Oh-OK. Last year I discussed at length the virtues of the then newly released Strum & Thrum compilation on Captured Tracks, and mentioned I had familiarity with the bulk of that double-albums prestigious roster.  There were however a handful of exceptions that even I hadn't been tipped off to yet, with Holiday being one of them. More advanced and virtually doubly rewarding as Oh-OK, Hopper and Co. were groomed on REM's early catalog, and somehow managed to shoehorn even more of an accessible pop angle into the five songs populating hello.  I never tire of those bright, clangy chords, not to mention a little reverb.  This very well could have been a Mitch Easter production, but the band took the reigns themselves for their stunning and regrettably lone record. 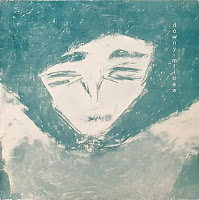 Of the three bands featured tonight, Downy Mildew actually boasted something of a pedigree, releasing a succession of albums in the 80s-90s that may not have made strides on the Billboard album charts, but to their credit were a staple of college radio playlists during their run. While virtually every piece of music they attached their namesake to was at minimum listenable the early stuff did it for me, and it didn't get much earlier than this self-titled 1986 platter. Generally speaking, with four songs eps there isn't much room for slack, yet on the second tune in, "The Drive" DM took their sweet time (seven minutes to be precise) and came up with something a bit, um, repetitive and frankly, boring.  This record's more convincing salvos, "Experience in the Far Southwest" and "Purple Parlor" are concise by comparison, and are downright rewarding in their jangly acumen and bright, textured execution. All four cuts comprising Downy Mildew were appended to the CD addition of the band's 1987 Broomtree album, but I think my vinyl rip of this one offers a slightly richer sonic experience.

Thanks. Liked the Holiday song on Strum and Thrum so hopefully the rest of the ep is as good.

Very psyched for Holiday! Had just recently learned of the EP's existence and gone on hunt...

Thanks! Your Chanukah flame burns eternal!