Welcome to night numero uno of the Festival of Lights...which might actually resemble resemble night eight of Chanukah 2018, when I also featured Material Issue, with the selection that evening primarily focusing on rare and unreleased studio offerings.  This year I decided to go with an (almost) complete live show, a promo interview circa International Pop Overthrow, and a relatively hard to come by tribute album. 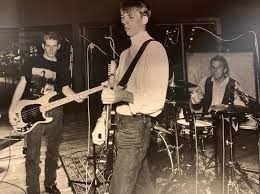 To recap MI's career would be something of a redundant exercise, simply because so many of you know the story, but I'll be as concise in this blurb as possible. A power trio from the Chicago suburbs kicked off their tenure in the mid-80s and slowly but surely ingratiated themselves into the greater metro area scene, flirting with punk and soon settled into a well-honed power pop modus operandi.  After excising every morsel they could out of their local DIY circuit by way of consistent gigging and well received indie releases, Material Issue signed to Polygram and released a stunning 1991 debut, the aforementioned International Pop Overthrow featuring signature singles like "Diane," "Valerie Loves Me" and "Renee Remains the Same." It sold roughly 300,000 copies, but the band saw diminishing returns with their sophomore LP Destination Universe in '92, and Freak City Soundtrack two years later. They were eventually dropped by Polygram, but continued to play and record.  Frontman Jim Ellison took his own life on June 20, 1996.  A posthumous fourth MI album, Telecommando Americano arrived in 1997, and to a modest extent the band's legacy grew over the ensuing decades.

They say absence makes the heart grow fonder, and my appreciation of Material Issue seems to have accumulated exponentially post-1996.  I was aware of Jim and Co. as soon as IPO dropped in '91, and considered myself an appreciative listener, just not a hardcore devotee. There wasn't necessarily one red-pill moment that suddenly thrust me into the latter camp, rather the build-up to mega-fandom was slow but steady.  It's easy and certainly tempting to reflect on MI with an air of melancholy, but the liveliness and poignancy of their music makes it almost impossible to adopt such an attitude.  While there is likely little material left in the vault for surviving bandmates Ted Ansani and Mike Zelenko to release to the public at large, the two infrequently perform as Material Reissue with past guest vocalists often entailing Phil Angotti. A Material Issue bio-pic Out of Time is slated for it's debut showing later this week.

As for the music this entry concerns, the meat and potatoes is a live soundboard recording of a June 1991 performance at the Vic Theatre in their hometown. If not a gig of seismic proportions it does capture them at the peak of their prowess and popularity, with all of the key cuts from IPO represented, as well as an encore heavy on covers (Simon & Garfunkel, Thin Lizzy and The Sweet). John Haggerty of Naked Raygun was enlisted as a guest guitarist for this show, not an obvious pick. This concert is one of the volumes in the MI Issues bootleg series (no. 15 to be specific). I've got it for you in MP3 and lossless FLAC below.

Though it was only made available as a promo to radio outlets, record shops and the like, a relatively well circulated interview cassette, Chatter was issued by Polygram in conjunction with the release of IPO in 1991, and a copy made it into my hands. The eleven minute reel features snippits of assorted album cuts and is interspersed with interview soundbites, with Jim assuring potential listeners of Material Issue's "real band" bona fides. Though it's not specifically mentioned, you can almost bet he makes this point on the heels of Milli Vanilli being outed as frauds. A little further in he reveals the inspiration for "Valerie Loves Me," but since this thing is such a brief listen as a whole I shan't indulge any more info than that. 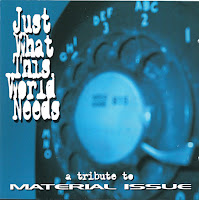 Finally, a Material Issue tribute album from 2000 that I acquired just within the past year.  Just What This World Needs, features thirteen relative unknowns from Chicago and surrounding environs "issuing" (so to speak) their spin on MI favorites and the occasional deep cut.   Notably absent is "Renee Remains the Same," one of the band's most recognizable numbers that amazingly none of this album's participants were willing to adopt. What is on here is typically satisfactory, with the renditions usually skewing in the direction of the original compositions.  One exception is Ness' take of "She's Going Through My Head" featuring piano accompaniment and a lovingly fucked with arrangement.  And with that, let's all hope Material Issue's songs remain resident in our respective noggins for many years to come.  Track lists and links are as follows:

V/A - Just What This World Needs: a Tribute to Material Issue

This is a GREAT start for the week.
Always amazing where you got the interesting things from.

Thanks for all of this.

Interesting that the Vic Theater show is actually their set opening for Simple Minds that night. A longer than usual set for an opener. Kinda an odd pairing, but as a fan of both, I loved it that night.

I was never a fan but I saw MI probably in '91 in a small venue, so small that at one point Ellison looked at me and said "This next one is for the gentlemen in the glasses." I never knew if he was taking the piss or not. Later he tumbled backwards over a monitor, which I always suspected he did on purpose because it seemed like a rock 'n' roll thing to do. He was the kind of rock and roller who ran his own label, not the kind who got shitfaced and fell over monitors. In fact my roommate at the time released a LP on his label. I met Ellison when he came to one of their shows. Seemed like a nice enough guy.

On a working holiday in the States in mid-'96, I saw they were playing and was desperate to go see 'em...until it was pointed out to me that Chicago was the best part of a day's drive from where we were in upstate NY. It looked a lot closer on the map...

It ended up being Jim's last show. :(