The Cavedogs certainly didn't own the '90s, and weren't even a known commodity outside of their native Boston when they cut their teeth as far back as the mid-80s. Nonetheless, those who caught the video for "Tayter Country" in the wee-hours of the morning on MTV, or who were in earshot of the song on various left-of-the-dial outlets, were compelled to locate the band's 1990 debut, Joy Rides for Shut Ins.  Coming off as some kind of delightful mutation of latter-day Replacements and say, Crowded House, the trio of Brian Stevens (bass/vocals), Todd Spahr (guitar/vocals), and Mark Rivers (drums/vocals) made two utterly compelling albums for Capitol Records, that were a hit on college radio, but crossover success eluded them, and they called it a day not longer after the 1992 release of Soul Martini, the album this entry concerns. 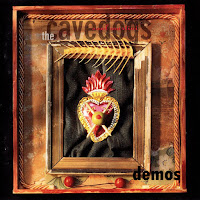 The three protagonists in question were often corralled into the power pop pen, and to a certain degree logically so, but the Cavedogs bore an intricacy and dexterity their peers must have breathless to compete with. Not merely whiz-kids cruising in the melody/harmony carpool lane, these guys possessed a songwriting aptitude that was at once clever, verbose and even a bit consoling. Problem was that wasn't what mainstream kids were pining for around the turn of the decade, and post-1991, what little momentum the Cavedogs garnered from their first album had diminished, alongside enthusiasm for some of their like-minded counterparts - Jellyfish, Smithereens, Material Issue, etc. Still, established customers realized that Soul Martini wasn't a sophomore slouch in the slightest, boasting a dozen hook-savvy numbers chockablock with wit, irony, and an ever so perfect amalgam of polish and grit. Tonight I offer you a collection of demos for the entire record and a couple more tunes that wound up as b-sides. As for the cassette these songs come from, it isn't a dubbed bootleg, so much as an official in-house tape that floated around the offices of Hollywood & Vine, with copies possibly winding up in the hands of radio music directors and such.  There is no mention of the cassette on Discogs, and aside from my personal copy I have never encountered another one. The iterations of the fourteen cuts here were hardly primitive or meagerly recorded incarnations of what was to become the finished product, but they are wholly unique recordings, even though it sounds like 98% percent of the building blocks for Martini were squarely set into place.  If the Cavedogs are brand new to you, tracking down an original copy of Soul Martini would be an ideal place to start, but since these demos are so in tandem with the album various, there's absolutely no harm in delving in right here. Enjoy!

I saw the Cavedogs in Atlanta, so they were "heard of" a little outside of Boston. I believe I had first heard them on 120 Minutes. I think they were the openers, but I cannot recall for the life of me who the headliners were. I have ruled out Big Dipper and Scruffy The Cat because I saw them together.

Thank you for this!
I had this, along with a few other rarities on a CDR back in the day that I foolishly allowed to deteriorate before I ever got around to copying the files.

The Cavedogs toured opening for The Charlatans UK (!)around this time. Before that they opened for The Connells and also for The Dead Milkmen if I remember correctly.

Coming from Boston, I saw the Dogs multiple times. All three have continued to pop up ever so often on various quality releases. Brian Stevens is prolific on Bandcamp. Todd Spahr's Banquet Hall and Gravy are two great bands. And let's not forget Mark Rivers' Poundcake. Even a saw a Dogs reunion show a while back. Love this - THANKS!

THANK YOU SO MUCH! This just made my winter months much happier! I still have "Joy Rides" and "Soul Martini" on CD, but I sold off my vinyl years ago. A few of thee ended up on "Rock Takes A Holiday" which I had on 12" but have never been able to find since. "Part of This" might be my favorite Cavedogs song, and I finally have a copy again! THANK YOU!!!!!

Dave @Too Much Saturn said...

Thanks for this. Weird because Love Grenade popped up on my iTunes yesterday.

And Lucky answered my question. I did see the Cavedogs with the Charlatans in 1991. Thanks!

Thanks for chiming in everyone! I never was fortunate enough to see the Cavedogs. I could picture them on a bill with all the bands you mentioned Lucky.

this is a treasure. i remember hearing baba ghanooj on WFNX in boston as a kid and it instantly became my favorite song and honestly it still is one of my all time favorites. i never got a chance to see them live but man they are an overlooked gem.