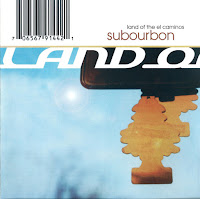 Though it does take me awhile (in this case almost five years!) I eventually make it through the mounds of bargain bin CDs I buy, and just a few months ago I slid this marvelous disk into my auto in-dash. Land of the El Caminos were a Chicago trio who really had their fingers on the pulse of the indie rock motherlode that befell an appreciative world in the 1990s.  Grabbing inspiration not so much from their hometown scene, rather Chapel Hill, NC, the Caminos pilfered a lesson or two from the likes of Small 23 and Archers of Loaf.  In fact mouthpiece and six-string wrangler Dan Fanelli bears a scratchy vocal timbre not far removed from the Archers' Eric Bachman.  No, you're not getting 75 mph pop-punk here, but instead a wiry, but melodically-enhanced splay of bittersweet notions and amped-up sonic appeal that doesn't lean too hard on your typical slacker fence posts.  The surprisingly sober Subourban emanates charm and "feels" for miles - or as long as it's eleven gallon tank will carry us on "Boxed in a Wind Tunel," Sold Me Out," and the concluding "Fragments," which features some shredding J. Mascis-esque fretwork. Two more LotEC albums exist, and I hope to get my mitts on them soon.

I own the other two albums. also good stuff

Custom packaging industry is growing faster nowadays. Every single brand is trying to improve their packaging so they can attract more people towards their brands.