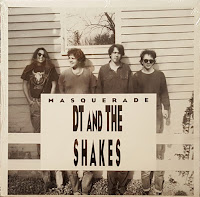 Not to be confused with a covers band of the same name, this DT and the Shakes called the environs of Washington D.C. home and were mostly active in the late '80s, bleeding into the next decade a tad as well.  Per the Washington Post (who provide more details than I ever could) this foursome were purveyors of "garage thrash." Fairly accurate assessment, as were other acts in their league like early Soul Asylum plus late, great lesser knowns Carnival Season, Finger and The Junk Monkeys. Call it a melodically-informed holy racket, or whatever, but despite the 31 year-old carbon date on this sucker, I'll take "I Found My Disguise" and the dazzling title cut over most of what passes for 'rock' these days.  The only legitimate curiosity surrounding Masquerade is the inclusion of no less than four, minute-long unlisted pieces which are predominantly mellow instrumentals providing no logical continuity or segue, and add not one iota to the eight structured songs that surround them. Why?  Because they could I suppose.  I included them in the audio but omitted them in the tracklist below.

Finally, if you enjoy what you've heard here, dive into, Smooth Studio Crafted Teen Fodder over on Amazon downloads, which evidently compiles an early DT&S ep and single.