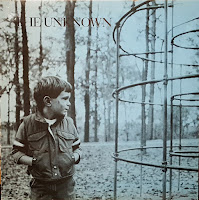 According to the mighty Discogs, there are/were no less than fifty bands running amok at one point or another named The Unknown.  I wouldn't have guessed there would have been quite that many who would have opted for such a self-deprecating moniker, but so it goes.  This one was a Maryland quartet who slotted in comfortably with the college rock set, specializing in "serious," but breathable tunes. The pensive "Eternity" and "Perfect Ground" bleed melancholic, naval-gazing hues, without emanating anything overly indulgent. While the aforementioned were pleasant enough, the band up the ante on side two of The Unknown, which is where these guys really sink their teeth in, with the strident, up-tempo "Dear Mrs. Jones," followed-up the even janglier "Slow Song" wielding tingly arpeggios like there's no tomorrow.

I was only able to find a couple of relevant references to these guys, including the Unknown's follow-up, Fall, here. On YouTube you can check out frontman Jonny Alonso many years after the fact performing a solo version of this album's closing piece "Songinsee."

thanks!!! isn't it funny that so many of the recent LP/EP's you've posted, put an artists best tracks on the SECOND side of their releases? :)

Thanks for the link dirth. I noticed the same thing too Jim!

They were on this release as well as just about every other Baltimore alternative band at the time
https://www.discogs.com/Various-Seedy-Sampler/release/12196466