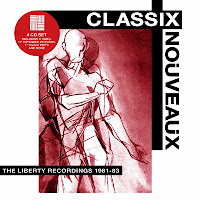 Arriving in the London new music scene in 1979, Classic Nouveaux were born a few minutes late to be forerunners of the soon-to-be-ample goth and new romantic movements, but were nonetheless earmarked and shoehorned into the latter whether they desired said placement or not.  They bequeathed a catalog of memorable singles and albums, albeit the quartet never ascended to the echelons of the Duran Durans or Culture Clubs of the world, despite bearing a fairly unique image, not to mention a pedigree that consisted of two expats from punk ground-breakers X-Ray Spex.  While three quarters of this foursome brandished a well-coifed visual aplomb that could have comfortably slotted them amidst the rosters of A Flock of Seagulls and Kajagoogoo, it was frontman Sal Solo who bore the band's most striking visage. Egg-bald, with pasty white skin and gaunt facial features, Solo also dabbled in gender bending attire and makeup, with an austere, commanding poise to match.  Take even the most furtive glance at any Classix press photo and it's a cinch to determine who the alpha male of the group was.  Boasting several charting UK singles, sadly none of them were chart toppers.  They were hot to trot for a moment across the pond thanks to heavy rotation on MTV, but success was an even more elusive proposition in the States otherwise. Ironically, they translated best in former eastern bloc locales Poland and Yugoslavia, and even performed in those nations while the iron curtain was still a metaphorical sword of Damocles. Cherry Red has remastered and consolidated C/N's three (technically four) LPs with their accompanying singles and remixes into the handy micro-box The Liberty Recordings 1981-83. In addition to one stop shopping it also remedies the fact that the separate CD reissues of their album have fallen out of press.

Despite the aforementioned inclusion of two X-Ray Specs (Jak Airport and BP Hurding) Classix did not specialize in avant punk meanderings in the least, instead opting for a more current and streamlined forte wherein the band opted for a quasi-noir tact on their debut platter, Night People, a record that at it's apex yielded a catchy-as-all-get-out stunner of a single, "Guilty." It's driving rhythm and keen melodic strengths garnered them modest chart placement in their native Britain, and the video was a cult hit in America thanks to the quickly burgeoning MTV.  Night People wasn't Classix' most accessible record, and that could be due in part to Sal's discernibly gruff vocal aplomb on several of the deeper album cuts.  Still, the album offered plenty of fun respites with some tunes even exuding a mild theatrical sway (e.g. "Inside Outside" and "Tokyo).  Comparatively raw and frenetic stacked up to later triumphs La Verité and Secrets, Night People was fit for release in North America as a self-titled release with a slightly altered and reshuffled song selection and entirely unique art.  But why?  I have yet to come across a definitive account for the alternate Yankee version, but strictly by virtue of my own perceptions, I reckon Liberty wanted to substitute some of Night People's less approachable cuts for a smoother listening experience for discriminating American ears. Both versions of the record are presented in their entirety on The Liberty Recordings, with unique but contemporary b-sides added to each. 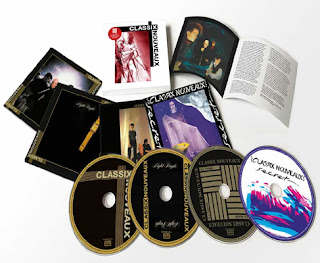 1982's La Verité massaged and contoured Classix' overarching approach without blunting it.  "Because You're Young" is bejeweled in soaring hooks, and a more pronounced new-wave aptitude is present on the record with an abundance of soothing, lucid keyboard fills.  Less consistent than the debut, it spawned the combo's biggest hit, "Is it a Dream' (scaling it's way to #11 in Britain).  Truthfully, La Verite houses a handful of tunes that should have been as prominent as the aforementioned, namely "Never Again" and "Because You're Young." "1999's" post-punk sub-context is a relative anomaly here, and a highly  rewarding one at that.  If you're seeking an analogy that correlates with Classix' musical development at this phase of their tenure, you could make a solid case that La Verite was their equivalent to the Psychedelic Furs Forever Now, as both were key transitional albums that blended a retention of the band's respective nascent gestures, simultaneously forecasting what would shortly be in the offing. A generous ten bonus cuts, including a cavalcade of single versions/edits and worthy non-LP b-sides are appended.

Classix Nouveau's swan song, Secrets found the band making a break for the dance floor without tripping over themselves, and better yet, maintaining enough restraint to keep themselves from spilling over the brink altogether.  More in keeping with what David Bowie was offering around the same era than caffeinated troupes like Dead or Alive, Classix Nouveau adopted sophistication as their new calling card on Secrets, splitting the difference between rhythmically sentient appeal and plush, deftly crafted songwriting. Though a departure from their early modus operandi, "Forever and a Day" and "Never Never Comes" downplay the melodrama, and instead reroute the emphasis on accessibility, if not sheer infectiousness.  As with the other albums in this collection, we're treated to a phalanx of supplemental material, entailing extended remixes, and a fine stand-alone single "The End...or the Beginning," which preceded the album.

In 1985 the band called it a career, with singer Sal Solo literally going solo with his first album Heart & Soul arriving later that year. He soon thereafter pursued arranging and performing Christian music.