A few weeks ago when I was updating a broken link for one of several Sugarplastic entries that I've posted, it occurred to me they were deserving of a deeper dive, so to speak.  True I'd already shared all manner of singles, an outtakes collection and even an early demo tape, but there was still plenty of juicy morsels I had accumulated over the years to be plucked and brought to market. Whether you've already imbibed their four proper albums, the rarities I've been sharing heretofore or both...or neither, you can regard these recordings as a bountiful appetizer or a downright succulent dessert. 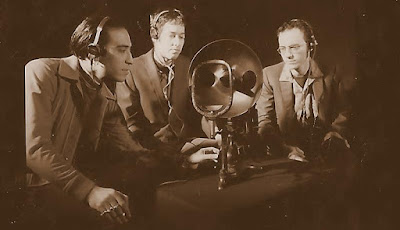 I've spilled so much text with no shortage of biographical details on these guys already, but for the uninitiated, The Sugarplastic are/were an immensely talented L.A.-area pop trio whose body of recorded output spanned the entirety of the '90s and well into the first half of the next decade.  Garnering a small but dedicated following, the trio of Ben Eshbach (vocals/guitars), Kiara Geller (bass) and Josh Laner (percussion) seized on a mildly eccentric poise, offering considerable Anglophile nods to the likes of XTC, The Monochrome Set, and yes, The Beatles.  There's a not-so-subtle undercurrent of whimsy and mercurial charm threading their way through just about any song they leave their imprint on, and Ben & Kiara's barbershop harmonies merely buttressed the band's indigenous and often addictive tenor.  Weird, without being weirdos, the Sugarplastic were a unique proposition for a major label, especially in 1996 when their second and perhaps most representative album Bang, The Earth is Round saw the light of day on Geffen Records.  Such a singular species was bound to be a hard-sell in an era when Soundgarden and Stone Temple Pilots still ruled the roost, and as fate would predictably have it the masses were indifferent or outright ignorant to the curious threesome.  They persevered with two more studio LPs, 2000's Resin, and Will three years later.  Following up a series of subscription-released singles dispensed between 2003-05, they carried on as a live entity for a few more years, and to my knowledge are currently on an extended hiatus, or perhaps completely put to pasture.  Ben and Kiara have relatively recent solo outings to crow about, albeit far removed from the typical Sugarplastic mold. 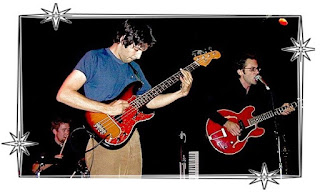 Recommendable as the albums are as an ideal jumping off point, the quintessence of what they were about is demonstrably summed up in a nine-song, in-store gig held at Los Angeles' No Life Records in April of 1996.  Captured straight from the soundboard, the Bang-era performance is crisp and nimbly executed, and plays to every iota of the Sugarplastic's spartan but melodic strengths.  Included are then current nuggets "Polly Brown," "The Way This Is," and "Montebello," earlier triumphs "Skinny Hotrod" and "Sun Goes Cold," and even a tune that was apparently reserved for live sets, "29¢ Stamp."

There's considerable song overlap between a KCRW, Morning Becomes Eclectic live-to-FM set from the same era as the No Life Records performance, but I'm including it for the interview segments intermingled between the tunes.  Sugarplastic songs often take on the gist of romantically-sentient, if not surreal and crooked fables, but the conversation entails background details and provides a sense of where the band's collective heads were when the emerging combo was briefly under the auspices of a major record company.

Finally, I've curated a collection of fourteen (mostly) under-released doses of 'plastic passion, that even the most astute devotee might be lacking on their hard drive or otherwise.  The first six cuts were made available for literally less than 48 hours on Bandcamp, approximately five years or so ago.  No recording dates were affixed to these tracks, but they bear the strident and buoyant gait that so typified the Sugarplastic aesthetic.  Next up are a quartet of songs that appeared on a "bonus" CD that were made available to subscribers of the Tallboy Records 7x7x7 singles series I mentioned in passing above.  Even by Sugarplastic standards, "Overextended And Helpless At A Payphone In Chinatown" and "Hesperus And Phosphorus" exude some relatively oblique properties.  These are followed up by three early, unreleased tracks that were deemed fit for unleashing on YouTube.  Finally there's the band's contribution to the soundtrack of the cutest superhero cartoon enterprise ever.

Thanks! I love this band.

My friend Anna released the "7x7x7" set of Sugarplastic 45s on her TallBoy label oh so many years ago.

You're welcome. Yes, i was a subscriber to the Tallboy Sugarplastic singles thing. Good times.

Wow, this is a treasure trove! I consider myself a Sugarplastic diehard (I am the proud owner of "#1 of 500" of the 7x7x7 Tallboy release Popville mentions above), but a lot of this material was unknown to me. Cheers!