Watching the candles burn - the eight nights of Chanukah returns this Thursday evening. 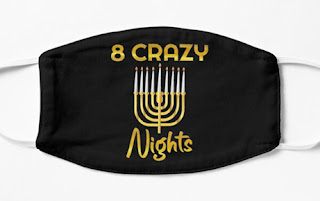 2020 has got to be good for something...right?  With all the crazy and cataclysmic events that have taken place in the last eleven months or so, even I'm not as jazzed about annual traditions.  Nonetheless, as long as I still have a supply of extra special ear candy to share with you, I wouldn't feel right depriving you of  the usual eight night spread of choice bootlegs, live rarities and standout vinyl scarcities that I've offered every Chanukah since 2012.  The festivities begun this Thursday evening, come around sundown EST.

If you're new to the site please check out the preliminary details for past Chanukah roll-outs (2012, 2013, 2014, 2015, 2016, 2017, 2018 and 2019).  You might be asking what initially motivated me to begin this tradition altogether.  For one, it gives me a convenient excuse to share several mind-blowing "gifts" instead of just one big reveal on Christmas.  Secondly, Chanukah represents personal relevance to me.  We all know you were envious of that kid down the block who had a yarmulke festooned to their head, who was given the privilege of lighting the menorah, and of course, reveling in eight glorious nights of presents.  Once again, I'm paying it forward.  Previous Chanukah entries have featured Wire, Velocity Girl, Jellyfish, Husker Du and Teenage Fanclub, but name recognition is hardly a guarantee.  As in past years, there will definitely be familiar faces, but also several entrants that have never garnered face-time on W/O.  Bear in mind that what's crucial to my ears may not be of equal essence to yours, but kindly, try to humor me.

At the top of each Chanukah upload will be a thumbnail photo of a menorah, with the appropriate number of lit candles to denote each succeeding evening until all eight slots in the candelabra are occupied on the concluding night, December 17th.

And as always, download responsibly.  Enjoy.
Posted by spavid at 6:01 AM

I was wondering if you were going to continue your year-end tradition. I could see your decision making going two ways: on the one hand, this year has been a dumpster fire, and who has the energy? But then, celebrating helps take the sting out of all the badness.

I really appreciate all your efforts. This blog is the very first place I land every morning. It's part of my daily ritual.

Can't wait to see what treasures you've got in store for us this year!...

Great news, always look forward to this. Thanks much!

I always look forward to the treasures you drop at this time of the year. Thank you so much.

Thank you for everything. I am very curious already !!!