Usually I can inform and opine at length about titles I share as part of my annual Chanukah series, but in the case of the Great Outdoors, a mid-80s export from Birmingham, England, I'm afraid I can't supply you with an excess amount of background detail (though there is a short write-up/pictorqal on them over at Birmingham Music Archive).  To paraphrase a certain Death Cab For Cutie album title, sometimes you don't have all the facts, but are still overwhelmingly inclined to vote "yes." 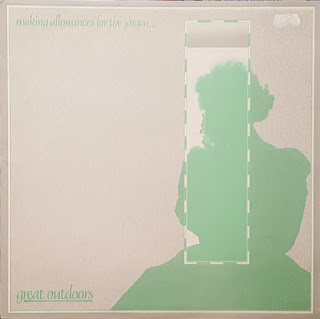 Simply put, I really fell for this album.  Not only does it's 1986 timestamp alone indicate something promising, or the fact that it was released on a UK indie label (Upright) boasting an obscure but enticing roster, Making Allowances for the Jargon is the sound of an upstart band with it's integrity fully intact.

Integrity alone doesn't necessarily exude talent, but this quintet seemed to have both cards firmly in hand.  At the time, many of their ilk were crafting strummy/jangly and literate guitar pop with no shortage of appeal, which hardly placed G/O in a class unto themselves.  Still, they had the chops and the songs that should have slotted them somewhere amidst combos ranging from the Housemartins to the Railway Children, and even Trashcan Sinatras.  Right out of the starting gate, "World At My Shoes" sparks a sprite, visceral charge with a dynamite chorus hook and an aptitude far advanced for a band who were just unleashing their debut salvo.  Other selections here are nearly as vital - "Heaven Sent," "Newspapers" and the concluding "Guitar is Drunk" to name three more.  Some of Jargon's ballads, like "Buried in America" and "Acid Rain" could use a tad more lift, so to speak, but I like to think that some of the record's slower pieces are growers.  There's only ten songs here, so I shan't give much more away.  In a nutshell this is yet another great "lost" indie-pop album from a coveted era that I hope you'll give a spin or two.  By the way, the record's complete title is Making Allowances For the Jargon...Until All Intentions Are Clear.

Thanks for these gifts in these dark times. Although I am quite knowledgeable in music and even the obscure ones, you take it to another level.

Thanks for the Hanukkah gifts!

I only had the World At My Shoes 7" which btw, has a stellar B-side "Some Things".