So, I don't always commence my Chanukah downloads with a full fledged box set, but when I do I try to give you extra bang for your buck (that buck being the quite affordable sum of $0.00 😏).  For a good eight years there I regarded Rhino Records 2005 Children of Nuggets to be the finest and most comprehensive various artists box set in existence. Little did I anticipate that in 2013 Cherry Red Records out of the UK would if not up the ante, at the very least rival it. 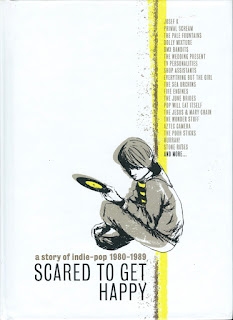 Enter Scared to Get Happy, a five disk, hardbound book-set spanning the entirety of the 1980s.  It's subtitle, A Story of Indie-pop 1980-89 gets it mostly right, however it doesn't come straight out and explained it's exclusively composed of British indie-pop.  The roughly twenty acts presented on the cover make it pretty evident of this (The Wedding Present, Jesus & Mary Chain and Stone Roses being some of the more predominant inclusions).  The back cover reveals the teaming, total roster of no less than 134 acts!  Perhaps not a record number of participants for a compilation, even by box set standards, but Scared to Get Happy is breathless in its depth, and never skimps on quality to rival its quantity.  As for the "Story of indie-pop" quotient of it's title, Scared to Get Happy literally achieves that end in the sense that this collection is featured in nearly perfect chronological order.  The accompanying booklet manages to feature bite-sized bios of everyone involved, a task that must have been as nebulous as licensing and digitizing all of the songs in themselves.

If I wanted to be extra-cynical I might be tempted to allocate about 30% of Scared's roster as "bands that influenced the Smiths," with the remaining 70% composed of "band's that were influenced by the Smiths." Unfortunately for me, a small-time music scribe, this collection of 134 artists isn't as conveniently monolithic as that, though the overarching tenor of the six+ hours of music featured here wouldn't be what it is without the shadows of such seminal antecedents like Aztec Camera, the Housemartins, and yes, The Smiths, looming so large overhead.  Arguably the ground-zero year for UK indie-pop was 1986, which was literally codified in May of that year when a particular issue of NME magazine hit newsstands.  Affixed to it was C86, a 22-track, gold-sleeved cassette issued in conjunction with Rough Trade Records of up and coming hopefuls, including on-deck indie luminaries Primal Scream, the Wedding Present, Mighty Lemon Drops, The Shop Assistants, McCarthy, the Pastels and the Soup Dragons among at least a dozen more.  This veritable who's-who (to come, in many cases) wasn't merely representative of the year 1986, but a musical aesthetic virtually unto itself, typified by independent artists boasting a mid-fidelity penchant, often chockablock with jangly guitar chords, humble vocals, and relatable heart-on-sleeve prose, clearly bucking the far bolder, gaudier and frankly obnoxious Top-40 vendors that so dominated the mainstream on both sides of the Atlantic.  Scared to Get Happy contains selections (though not necessarily the same songs) from the brunt of the C86 tape roster, but goes 112 tunes better, thoroughly exploring what came before and after that seminal reel became so literally and metaphorically tangible. 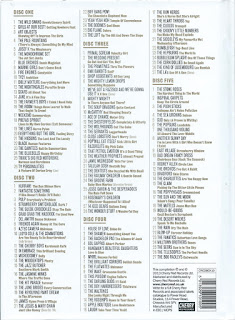 Deriving it's title from a lyric in Hurrah!'s "Hip Hip" (a song ironically not featured in this set) Scared... abundantly serves as both an archive and a taster for almost every key player in Britain's Thatcher-era indie-circuit featuring no shortage of heavy hitters - Aztec Camera, Jasmine Minks, TV Personalities, June Brides, That Petrol Emotion, Brilliant Corners, Another Sunny Day, Primitives, Orchids, Pale Fountains, Wedding Present, Prefab Sprout, Lloyd Cole & The Commotions, usually represented by their signature songs.  Oddly enough, for every relatively successful band on Scared... that made their mark in the decade in question, you'll find an equal number of participants who would make a loftier splash in the '90s - Pulp, Soup Dragons, Primal Scream, Del Amitri, James, Pop Will Eat Itself, Wonder Stuff, Stone Roses, House of Love, The Shamen, The La's and the Boo Radleys all taking a seat at the table as well.  You might regard many of the aforementioned as the 'meat & potatoes' of this book-set, so to speak, but for myself and many others who managed to snag a physical copy of Scared... the real draw were the groups that made the indie "small of fame," and for better or worse remained there.  For me having the likes of the Bodines, Close Lobsters, Dentists, This Posion!, The Corn Dollies, The Lines, The Charlottes, Pooh Sticks, Scars, Suede Crocodiles, 14 Iced Bears, East Village and One Thousand Violins all anthologized in one tidy compendium is a phenomenal treat.  The cherry on top is the addition of several songs that heretofore only existed on scarce vinyl singles, or somehow never crossed over into the digital realm.

Revisiting what I mentioned in the middle paragraph, not everyone here owes a sonic debt to Morrissey, Marr & Co, and in fact, you'll find some veritable departures from clangy guitar pop, evidenced by way of the comparatively avant leanings of We've Got a Fuzzbox..., Big Flame, Talulah Gosh, and Josef K.  Virtually no significant sub-genre of UK indie pop (save for maybe shoegaze) is unrepresented here, and there are dozens of worthy unknown quantities that I didn't get to mention in this piece.  A complete track list is depicted above, and as a side note, while the CD book-set incarnation of Scared to Get Happy has long sold out, 28 of its songs were condensed into a double LP vinyl set in 2017, not to mention another manageable, whittled down assemblage of 50 tunes that can be streamed at Amazon and Spotify.  Links to the unabridged version are directly below, but I'd be remiss if I failed to mention that in 2013 I assembled a hypothetical sixth disk of what this box could have potentially contained.  Feel free to dip into that one as well.

Have long enjoyed this compilation - thanks for the sixth disc, a great contribution!

Many many thanks for this ultra rare Box!!

Thanx for sharing!.. saw Hurrah! twice in 87 on the FourPlay tour.. nice guys

Love the sixth disc. Thanks. Would love to see more added special discs to other box sets in the future.

Your first offering of 2020... and I already have it. Even the sixth disc! Damn! Oh well, at least you've put it in my head to go listen to it again.

Thanks so much for this great set. and all of your Holiday posts! You are awesome!

Playing Catch-up. Thanks so much for this awesome post.

Also playing catch-up... related, I recently read a book called Popkiss: The Life and Afterlife of Sarah Records by Michael White. It's a very decent book; folks who like this compilation would probably enjoy it.