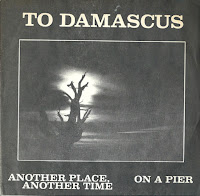 I really, really tried to get into To Damascus' 1987 platter Come to Your Senses ages ago, but it just wasn't meant to happen.  Thankfully, their preceding 45 was a different story.  This coed L.A. contingent was helmed by one Sylvia Juncosa, and per Wiki, her tenure with the band went something like this:

The band experienced numerous personnel changes over the next three years. They recorded a single at Radio Tokyo studio with producer Ethan James, where the majority of Juncosa's releases would later be recorded. For a very brief period in 1985, she was the guitar player in The Healing Dream, which soon afterward became The Nymphs. When David Winogrond and Tyra von Pagenhardt joined in 1985, To Damascus finally had a more stable line-up and began a busy, productive period that would exemplify Juncosa's high-activity work style during those years. The band completed and released its first album, Succumb, which Juncosa had started earlier with former Leaving Trains members Jason Kahn and Tom Hofer filling in on drums and bass, respectively. Shortly afterward, they recorded a second album, Come to Your Senses, distributed by Restless Records, and embarked on a shoestring-budget US tour. To Damascus broke up on friendly terms in 1988 when Winogrond and von Pagenhardt were unable to commit to the touring musician life that Juncosa intended to embark upon.  In 1986, Juncosa also joined the SST Records band SWA, which featured bassist Chuck Dukowski, former Black Flag member and co-founder of the SST record label.

An interesting SST connection  BTW, Winogrond and Pagenhardt weren't in the lineup yet for this single.  Instead we're treated to Bill Lee on bass and Troy Anthony on skins.  "Another Place, Another Time" is an edgy, urgent ass-kicker if there ever was one with smart, post-punk tendencies for miles, leading me to wonder if T/D had any other tunes in their arsenal of this caliber.  The flip, "On a Pier," isn't one of them I'm afraid, wielding a rhythm that's more in line with a Bavarian oompah band.

A. Another Place, Another Time
B. On a Pier