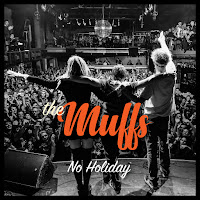 Two weeks and some change ago the world at large learned of the unexpected passing of Muffs front-woman, and latter-era Pandoras fixture Kim Shattuck, who succumbed to a private battle with ALS (Amyotrophic lateral sclerosis - aka Lou Gehrig's disease).  Like a lot of performers I followed, I never bothered to keep tabs on her, and quite frankly took her for granted.  Still, the news was profoundly troubling to me, and in that first week of absorbing the full gravity of events there were more than a few occasions when I found myself blinking back tears.  How could such a firecracker of a vocalist/guitar slinger, and oft described "force of nature" be taken down by such a cruel, debilitating affliction?  Hereditary for starters, as the same disease claimed the life of her father previously.  Her diagnosis came in the spring of 2017 when she started having issues with her wrist, per a recent piece published in the LA Times penned by Kim's longtime bandmate, Muffs drummer Roy McDonald.  To date, no cure for ALS exists, and treatment is modest at best.  Upon learning her fate, I'm certain Kim had myriad goals in mind, but there's only two I can say for certain.  First and foremost to keep the news of her diagnosis within her inner-most circle, and secondly, to bring to fruition a seventh Muffs LP that had already been in the preliminary stages.

The LA Times article I linked loosely delves into the mechanics of how No Holiday was recorded/produced.  Clocking in at eighteen songs and about 43 minutes (a record on both fronts for the band) much of Kim's basic vocal and guitar tracks were fortunately cut prior to her diagnosis.  This was crucial for several reasons, not the least of which her singing/speaking capabilities that were soon to diminish in light of her rapidly progressing ALS.

While not a thing of the past, the Muffs raucous and bratty punk-pop fervor was gradually giving way to a subtler sonic palette and in fact, a good half of the songs here were notably based around Kim's original acoustic takes.  The title cut, "A Lovely Day Boo Hoo," and "Insane" take root from this spartan, unplugged framework, but she's soon joined by McDonald and bassist Ronnie Barnett who appropriately fill in the quiet space.  Add-on guitarist Adam Schary helps flesh Holiday out on no less than ten songs, and even Kim's sister Kristen contributes backing vocals to "Earth Below," a fuzzy pop nugget not far removed from the Breeders.  There are a handful of more traditional Muffs power-chord gut punches in the guise of "Pollyanna" and the Nirvana-y "Down Down Down," not to mention rich, hook-laden salvos like "Sick of This Old World" and "On My Own."  The record's unusual genesis and relatively diverse composite results in a mildly crooked patchwork of tunes.  And with a dozen and a half of them to be exact, there's plenty to chew on.  I'm apt to think of No Holiday as The Muffs New Adventures in Hi-Fi, yet you'll find a uniquely Muffs-ian thread emanating through every sweet and tarty morsel.

If all of this hardly sounds like business as usual for The Muffs, you're right on the money.  Yet even though the finished version of No Holiday may not have exactly been what they intended when circumstances were normal in early '17, the personal tumult Kim was enduring barely spilled into the record.  The very closest I can speculate where there's any overshadowing is within a line in "Late and Sorry" - I don't know what to do, I'm clearly ill.  Ironically the lyric (as well as the song outright) is not delivered with an iota of self-pity or despondency leading me to wonder if she's referring to her condition at all.  Holiday concludes with Kim's strikingly lo-fi acoustic soliloquy, "Sky," that perhaps wasn't intended to be a tearjerker, but could understandably be interpreted as such given recent events.  As a friend once reminded me when I was grieving a family member, sentiments that make you cry when you're mourning someone will eventually make you smile.

No Holiday is available now from Omnivore, iTunes, and Amazon.

It's definitely a departure from all other Muffs output, but a very good album on its own merits. Knowing what was going on behind the scenes, so to speak, makes it a truly remarkable effort that will stand as a tribute to a fantastic artist.

You should also check out The Coolies EP Kim recorded with Palmyra Delran and Melanie Vammen (Uh Oh! It's​.​.​. The Coolies ). That tear-jerker label fits solidly on "Glad We Met" as well.

Thanks Johnny. Very accurate assessment. Will check out the Coolies soon.