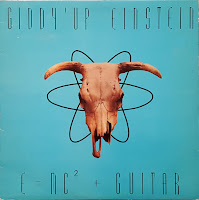 Well, the internet didn't have much to tell me about Giddy'Up Einstein, and I have a hunch I won't be able to do much better, but here goes.  The band consisted of just two full-time members, Mark Cult and Anthony Scott, and after gleaning all the credits on the back cover, it's safe to assume they called San Francisco home.  Speaking of the album jacket (not to mention their cheeky moniker) this wasn't a duo that always took themselves too seriously - though they do seem to address concerns over firearms and violence on "This One's a Gun."  E=MC2 + Guitar's finest moment is a no-brainer, the second cut in, "Wasteland," a savvy, extra melodious stab at power-pop that sounds like something Translator or the Red Rockers might have envisioned had they loosened their collars a tad.  The record's less engaging moments are worth sticking around too, though "Eurotrash's" abundant 80s-isms grate on me.  The final piece, "This Gun's For You" is a remix of "This One's a Gun."

Thanks! Yeah, "Wasteland" is indeed a gem.....i definitely hear some of the 80s UK sound here, can't quite put my finger on the artists, but thats a really cool song!!!!!!!