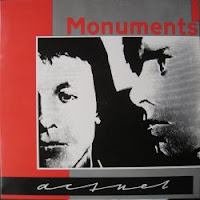 If only music like this was still being made.  Heck, it likely is and I'm probably just unaware of it, but I digress.  Actuel were a Nashville combo who if anything else boasted a mild Anglophile bent.  If they sounded like anything from the American south, a certain foursome who called Athens, GA home might be a vague comparison, but while Actuel's chimey instincts slotted them into the collegiate rock realm, it sounds like these chaps had more fun getting their post-punk jones on, as it were.  Even on Monument's livelier, more melodic traipses (the bookends "You and I" and "Until Another Time," not to mention the thoroughly visceral "Just Imagine") Actuel's agile prowess and textured nuances (including but not limited to subtle fretless bass lines) lend a certain mystique to their music that just about 99.99% of their contemporaries couldn't hold a candle to.  A slightly inconsistent platter, Monuments nonetheless bequeaths some invaluable moments of sheer charm and magic.  There's more available on the band's Soundcloud corner of the web.  Special thanks go to the now-defunct Feelin' Kinda Froggy blog for making these files available way back when.