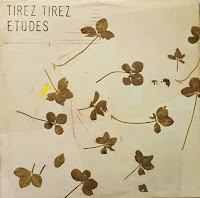 My post of Tirez Tirez's '87 platter Social Responsibility probably flew under the radar for most of you.  Being that it wasn't the most revelatory album to see the light of day that year I suppose that's understandable, but it did have it's moments.  Etudes, it's precursor by a good seven years is cut from inconsistent cloth as well, but it's choicer cuts are damn-near remarkable, beginning with "Razorblade."

A pesky write-up in the Trouser Press Record Guide has embedded the notion in me that Tirez foreman Mikel Rouse took his cues from David Byrne and ran with 'em, but"Razorblade's" delicately clanging chords and mid-paced tempo exudes a catchy, minimalist allure that the Talking Heads rarely elicited so subtly.  Elsewhere, Etudes isn't routinely immediate in sparking such visceral reactions, though you don't have to dig too deep to excavate some of Rouse's more convincing ideas, which happen to reside on side one.  "Hair" is a particular anomaly, flirting with a traditional rock-ballad setup before settling into the more artful dabblings Tirez were known for.  The problem with so much of Etudes resides in it's patently repetitive rhythms, which might make sense in two or three minute doses but Rouse insists on treading water for double that length in most instances.  Nevertheless, I'll take magic where and when I can find it, and "Razorblade" and this album's other intermittent surges of inspiration are worth revisiting.