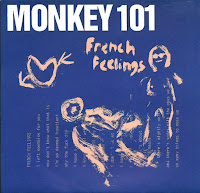 I find myself writing once again about a band I have scant knowledge on, but from my limited purview Monkey 101 qualified as one of the great "what-could-have beens" in indie rock - specifically had they stuck around beyond this pair of all-too-brief records.  M101's base of operations was Philly, but from a creative standpoint they paralleled the concurrent scene a few hundred miles due west in Ohio...though that's very much likely a coincidence. Still, these guys would have fit in splendidly with the Buckeye State's subterranean vanguard like Gaunt, Thomas Jefferson Slave Apartments and Prisonshake.  M101's lo-fi aptitude was likely the product of budget constraints and not so much hipster viability.  So be it, because their serrated, sassy and occasionally cantankerous moxie was a winning formula a good 75% of the time, culminating in such pearls as "French Feelings" and "Burgundy Wine." Inherent to their brand of distorto-laden dissonance, Arno's scuzzy guitars have a tendency to carry more of a tune than Paul K and Bob Turri's vocals.  More dichotomy, more fun.  Quite simply, they don't really make 'em like these anymore kids. 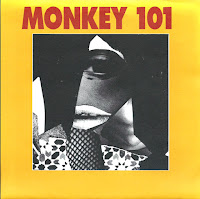 Per their facebook page (linked above) they still gig occasionally, and additional audio exists over on Bandcamp.  Also, our colleagues at One Base on an Overthrow had a few things to say about their "French Feelings" single.

I like this band. I had the 2 French Feelings songs already from some obscuro out of print comp (the name of which i can't remember), so it was cool to hear the ep as well. They also had a good track on the "Please don't lick the walls" comp on Rave records. Thanks as always!