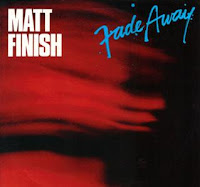 On Fade Away, Matt Finish (a band, not a solo act) sound as if they were straining to break out of Sydney, Australia's underground, but in fact the brunt of their career was spent on major labels.  Following up a pair of singles in 1980, their Fade Away ep bristled with post-punk urgency and boasted ringing, hard-strummed guitar chops that were equal parts rivetingly melodic and forward thinking.  The record's centerpiece is clearly it's seven-minute title cut.  Not the least bit "prog" or ponderous, it manages to mine a single riff to maximum extent and miraculously, never gets tiring.  The remainder of the ep, consisting of comparatively briefer songs, features more of Richard Grossman's irrepressibly chiming, but aggressive chord wrangling, and is largely a delight from beginning to end.  Fade Away was followed up the same year with the group's debut full length, Short Note.

Frontman Matt Moffitt died unexpectadly in 2003.  Matt Finish reconvened in 2006, featuring a revamped lineup of course.  A thorough bio of the band can be perused over at their Wiki site.

Many thanks for posting this. I saw Matt Finish live a couple of times around the time this was released. A fantastic band - they shoulda been huge.......

Thank you for this and I do have M.F. Short Note CD. Thank you again for this, very much!!!