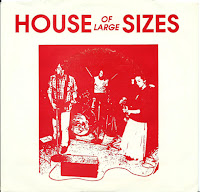 So I was never quite bitten by the House of Large Sizes bug, as it were.  Then again I know of no one else that was either, so maybe I'm not in the minority for once.  In my reexamination of the subject three decades on, I would submit to you this co-ed Cedar Rapids, IA  trio may have been on the right wavelength after all.  "Man Overboard!" is nearly four minutes of convincing, riffy indie-rock with a delectable guitar line and ironic observations.  The guitars get even stockier on the subsequent "Eisonhower," though a diminished semblance of melody and Dave Deibler's obnoxious vocal parlance threatens to collapse his band's humble abode.  Over on side two, "Cold-train" is redeeming and rollicking, loosely in the same ballpark as period Meat Puppets.  As for "40 Orange Cookies." one gets the impression the tune isn't necessarily about food.  From what little I've been able to glean online, these songs were re-cut for HoLS' first album, One Big Cake.

I am a huge fan of HOLS. I first saw them in 1986 opening for The Blake Babies and they blew me away. I've been a fan ever since and am friends with Dave on FB. They are quirky for sure and I have no idea what the hell their lyrics are about, but I love them. :) I'm still hoping that someday they will finish their final "three EP" series!

Now that you brought up the subject of HOLS I have a kind request: I haven't been able to spot digital copy of HOLS' major label debut "My Ass-Kicking Life" anywhere. If your vast collection happens to include this fine record please share it with us!

I used to see these guys a fair amount in the late 80s/early 90s when I was in Ames, Iowa. They put out some great rock music. Thanks for sharing.