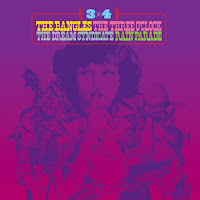 Dare I say this is one music scene who've literally decided to celebrate themselves?   For the uninitiated, Rain Parade, The Dream Syndicate, The Three O' Clock and The Bangles were not only considerable entities unto themselves, they composed a four-cornered vanguard in the mid-80s that was routinely referred to as the Paisley Underground.  There were several other minor players hovering on the fringes, but this quartet of bands were the ambassadors of an oft-underexposed mini-movement predominantly native to the Los Angeles-area.  While each of these aggregations had a distinct panache you might say all of the aforementioned majored in jangly, collegiate-level pop with a discernible minor in the more graceful facets of '60s psych.  Nothing too esoteric for the palette, mind you, as the Three O' Clock were wont to double dip oars in New Romantic waters, and as for the Bangles (initially The Bangs) the rest is rock and roll history.

A good thirty to 35 years has passed since the heyday of these artists, so what gives with this crash course in Paisley you might ask?  Well, December 2013 saw the reunion of all four bands for two nights in L.A. and San Francisco.  For all groups involved, not to mention established fans, it was a reminder of just how tight-knit this collective was back in the day.  The venture turned out to be significantly more than a mere nostalgia trip.  In the intervening years since, the Dream Syndicate and Bangles carried on in earnest, but something must have felt unfinished, for in 2018 all four combos found themselves smooshed together in the same king sized bed for yet another reunion in the guise of 3X4.

The premise of the 3X4 is a simple enough one, wherein each of the Paisley cornerstones takes to task one song apiece from their other three contemporaries.  The Bangles cover tunes by Rain Parade, the Syndicate and Three O' Clock, and the other groups follow likewise.  For you lucky ducklings who fancy themselves as aficionados of all four bands, or even those who've developed an appreciation of even just two or three this is a record that quite literally sells itself, not only by virtue of it's participants, but by the volley of long-endeared songs 3X4 unfurls like a new set of Venetian blinds.  On tap is a veritable Paisley hit parade with the Three O'Clock tackling the Dream Syndicate's signature "Tell Me When It's Over" and the Rain Parade's masterstroke, "What She's Done to Your Mind."  The Bangles turn in a reverent version of the Three O' Clock's timeless "Jet Fighter," the Syndicate wield an unlikely reading of the Bangles' "Hero Take a Fall," while Rain Parade do adequate justice to another Bangles classic, "Real World."  And that's only the half of what's in store here.

A couple of quick overarching observations.  Few if any of these covers outdo the original recordings.  No one is reinventing the wheel here, nor is anyone trying to 'best' or even challenge one another.  Instead, 3X4 is a project born out of sheer respect and mutual admiration.  Bearing this in mind, the album's casual, relaxed-fit tenor is wholly appropriate.  Secondly, if you're going into this one cold, you'll find 3X4 pleasant at the very least, but it would behoove you to have some familiarity with Paisley touchstones like the Dream Syndicate's Days of Wine and Roses, Rain Parade's Emergency Third Rail Power Trip, and the first couple of Three O' Clock records.

3X4 was issued in a brief run as a physical release for Black Friday Record Store Day last year, and has recently been made available in wider circulation both digitally and in tangible formats.  Yep Rock Records can serve you straight from the tap, and Amazon and iTunes also have you covered.
Posted by spavid at 8:19 PM

Love this album, and so excited to hear Rain Parade are working on new music as well!